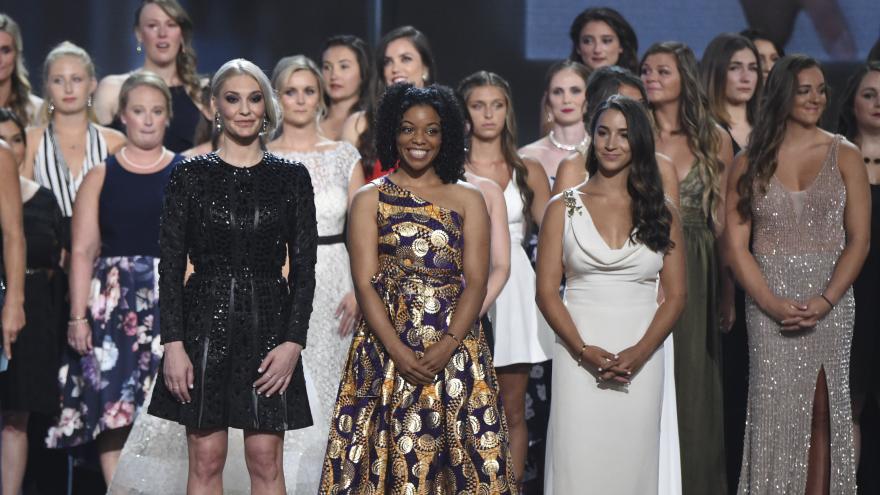 (CNN) -- They've put their abuser away for life. And on Wednesday night, 141 survivors of Larry Nassar's sexual abuse joined hands and received the Arthur Ashe Courage Award at the ESPYS.

Actress Jennifer Garner introduced the women as "an army that has come here tonight to be heard" as they walked toward the stage to a standing ovation, a process that took nearly two minutes.

Some of the nation's biggest sports stars wiped away tears as they applauded the women at the event that recognizes athletic achievements.

Before the award was presented, the survivors detailed their accounts of the abuse they suffered at the hands of Nassar, the former team doctor for USA Gymnastics and Michigan State University sentenced to up to 175 years in prison.

A total of 141 survivors appeared on stage, said Keri Potts, a spokeswoman for ESPN.

Crisis counselors and therapy dogs were on hand to support them as they spoke about the trauma they experienced.

Sarah Klein identified herself as the first to be abused by Nassar, and said she represented the hundreds of "sister survivors" who could not attend the event.

"Make no mistake, we are here on this stage to present an image for the world to see, a portrait of survival. A new vision of courage," said Klein, one of three women who accepted the award.

Her voice quivering, Klein thanked the detective and assistant attorney general who helped put Nassar behind bars, and said it's time to start caring about children's safety more than adult's reputations.

She described how important it is to speak out -- even when no one listens.

"Speaking up and speaking out is not easy. Telling our stories of abuse over and over and over again in graphic detail is not easy," she said. "We're sacrificing privacy. We're being judged and scrutinized, and it's grueling and it's painful, but it is time."

The annual award is given to those who mirror the spirit of tennis legend and human rights advocate Arthur Ashe.

Tiffany Thomas Lopez accepted the award along with Klein, and encouraged those suffering to stand tall when sharing their stories.

"I'm here to tell you, you cannot silence the strong together," she said.

Aly Raisman started her speech by listing the years they suffered.

"All those years we were told 'You are wrong. You misunderstood. He's a doctor. It's OK. Don't worry, we've got it covered. Be careful. There are risks involved.' The intention: to silence us in favor of money, medals and reputation."

She urged those who are suffering to speak out.

"We may suffer alone, but we survive together," she said.

He was also indicted in Texas last month on charges of sexual assault of a child at the Karolyi Ranch, where numerous Olympians have trained for decades.