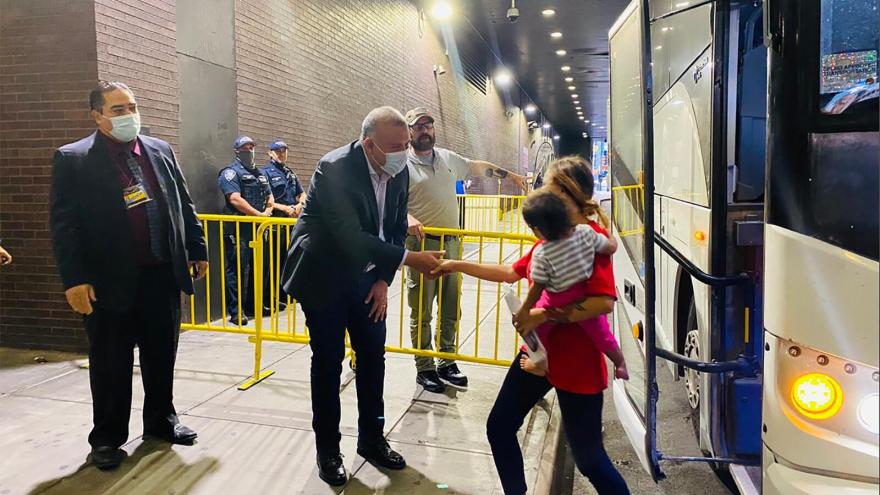 The group of asylum seekers that arrived on August 21 was a mix of families and individuals, a spokesperson for the mayor's office of immigrant affairs said.

(CNN) -- Buses with at least 140 asylum seekers arrived in New York Sunday in what officials are calling the largest single-day arrival of migrants from Texas.

The group was a mix of families and individuals, she said. City officials estimate there were around 10 children, including a 10-month-old baby.

They're among the thousands of migrants sent by bus to Washington, DC, and New York this year at the direction of Texas Gov. Greg Abbott in an effort to highlight his criticism of the Biden administration's immigration policies.

"Texas has also bused over 7,000 migrants to our nation's capital since April and over 900 migrants to New York City since August 5," Abbott's office said in a release Friday. "The busing mission is providing much-needed relief to our overwhelmed border communities."

New York Mayor Eric Adams and other city officials have previously accused Abbott's administration of allegedly forcing asylum seekers onto buses bound for New York City and of not coordinating with city officials on the transfer of people.

Abbott's office has responded in multiple statements that the people arriving in New York have come willingly and have signed a waiver consenting to their destination.

Including the hundreds bused in from Texas, about 6,000 asylum seekers have arrived in New York from border states since May, according to the mayor's immigrant affairs office.

On Sunday, volunteers greeted the migrants and provided food, water and clothing, Coronel said. The city is providing legal assistance as well, and there were two bilingual lawyers available to answer legal questions from asylum seekers, she said.

Coronel said a triage center was set up at the Port Authority to assess the migrants on arrival, and the city worked with the Fire Department to provide medical assistance. The city is also providing vans to transport migrants to shelters and hotels.

Aid workers from the Jewish community response group Masbia Relief were among the volunteers Sunday, offering essentials, like shoes and toiletries, to the arriving asylum seekers. When the buses pulled up with the migrants on board, there were cheers and applause and signs of welcome written in English, Hebrew and Spanish, according to the organization.

"The idea is to help people turn the page and start their new beginning here in New York in a better way," Masbia Executive Director Alexander Rapaport said in a statement.

"The journey ahead of them is still going to be challenging but we want to plant the seeds of change in their luck and give them their basic humanity back," Rapaport said.

"Our public schools are prepared to welcome families seeking asylum with open arms," Department of Education Chancellor David Banks said Friday. "Our schools are ready and excited to welcome our newest New Yorkers to class on September 8th."