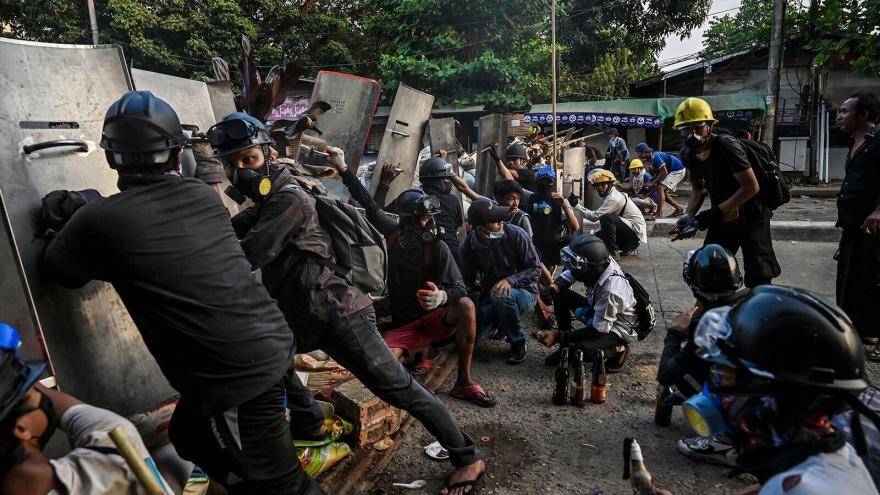 The House on Friday overwhelmingly condemned the military coup in Myanmar that ousted Aung San Suu Kyi. This image shows coup demonstrators in Yangon on March 16.

(CNN) -- The House on Friday overwhelmingly supported a measure condemning the military coup in Myanmar that ousted the country's civilian leader, Aung San Suu Kyi. But some conservative Republicans didn't support the measure, and it's unclear why.

Every House Democrat backed it, while 14 Republicans voted against it and GOP Rep. Paul Gosar of Arizona voted present.

The measure was a suspension bill, which are typically passed via voice vote, but earlier in the week Republicans forced recorded votes on five bipartisan pieces of legislation.

The Republicans who opposed the Myanmar measure include some of the most conservative members of Congress -- Reps. Marjorie Taylor Greene of Georgia, Lauren Boebert of Colorado, Andy Biggs of Arizona, Matt Gaetz of Florida, Thomas Massie of Kentucky, Ken Buck of Colorado, Mary Miller of Illinois, Chip Roy of Texas, Jody Hice of Georgia, Alex Mooney of West Virginia, Scott Perry of Pennsylvania, Andy Harris of Maryland, Ted Budd of North Carolina and Barry Moore of Alabama.

CNN has reached out to each of these Republicans about why they voted against the measure and has not heard back.

Daily protests have been ongoing for a month and a half in towns and cities across Myanmar after the military seized control of the Southeast Asian country in a coup on February 1.

The military justified its takeover by alleging widespread voter fraud during the November 2020 general election, which gave Suu Kyi's party another overwhelming victory.

Protesters are demanding the military hand back power to civilian control and be held fully accountable, and are calling for the release of Suu Kyi and other civilian leaders. Myanmar's many ethnic minority groups, which have long fought for greater autonomy for their lands, are also demanding the military-written 2008 constitution be abolished and a federal democracy be established.

Most lawmakers on Capitol Hill have been outspoken about the military coup and have condemned harsh tactics used to suppress demonstrations.