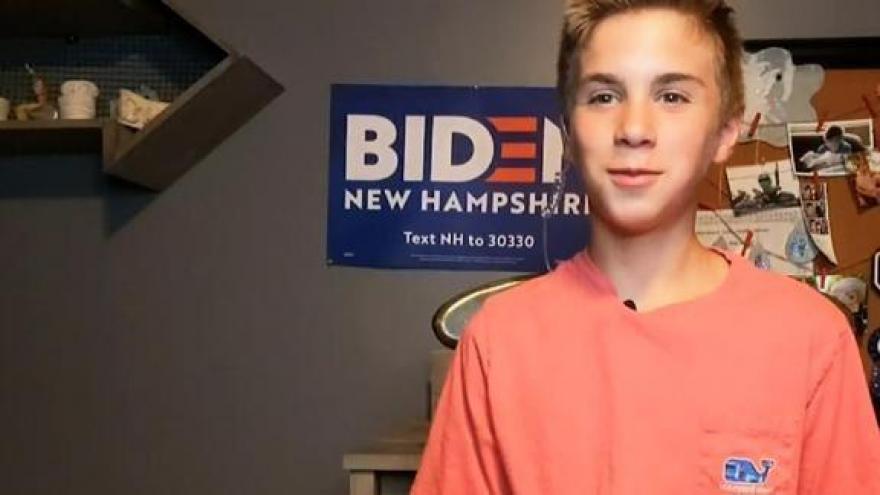 Thirteen-year-old Brayden Harrington spoke on the final night of the Democratic National Convention about how the party's presidential nominee, Joe Biden, has made him feel more confident about his stutter.

(CNN) -- Thirteen-year-old Brayden Harrington spoke on the final night of the Democratic National Convention about how the party's presidential nominee, Joe Biden, has made him feel more confident about his stutter.

They had met in February at a campaign event in New Hampshire. After they first spoke on the rope line, the former vice president invited Brayden backstage to continue their conversation about stuttering and told him about how he has worked to overcome his own stutter.

"He told me that we were members of the same club: We stutter. It was really amazing to hear that someone like me became vice president," Brayden said Thursday night in the video recorded for the convention.

Biden, who has said he still occasionally catches himself stuttering, showed Brayden a copy of the campaign speech he had just delivered in New Hampshire with markings showing where he could take breaks between words.

"He showed me how he marks his addresses to make them easier to say out loud. So I did the same thing today," Brayden said, flipping around the piece of paper he was reading to show the markings on his speech.

"I'm just a regular kid, and in a short amount of time, Joe Biden made me feel more confident about something that's bothered me my whole life. Joe Biden cared. Imagine what he could do for all of us. Kids like me are counting on you to elect someone we can all look up to. Someone who cares. Someone who will make our country and the world feel better. We're counting on you to elect Joe Biden," Brayden said.

His father, Owen Harrington, told CNN at the time that Biden "put his focus on Brayden and made time for him, talked to him, explained that it doesn't define him, he's stronger, that he's a good person. It was really overwhelming for Brayden. He started breaking down a little bit."

At a CNN town hall in February, Biden offered a rare lengthy and personal reflection on how his stutter has affected his life.

"You know, stuttering, when you think about it, is the only handicap that people still laugh about. That (they) still humiliate people about. And they don't even mean to," Biden said at the town hall.

Biden has said he didn't receive professional help for his stutter but practiced in the mirror for hours on end reciting poetry written by Irish poets like William Butler Yeats. He also credited his mother when it came to not letting his stutter define him.

Biden said at the town hall that he keeps in contact with about 15 people who stutter, and that he tells them it is "critically "important" that they don't let their stutter define them. When he met Brayden, Biden asked him for his phone number and said he would call to check on him.