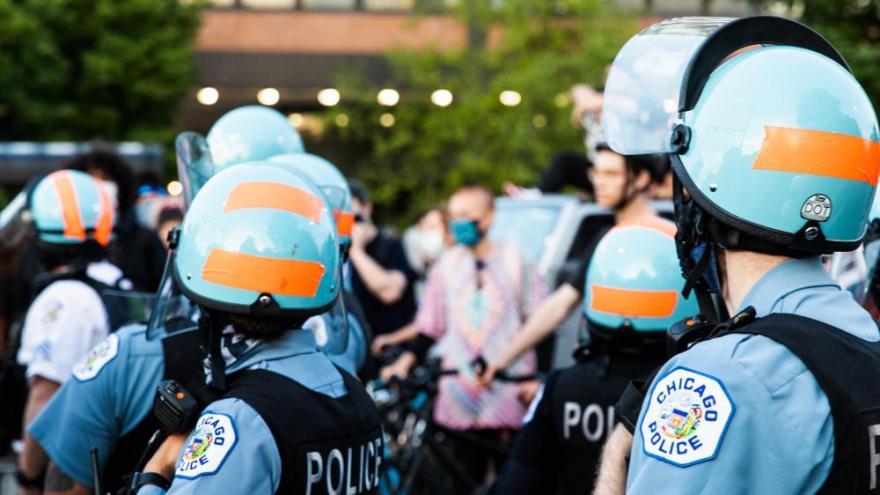 Thirteen Chicago police officers lounged and slept in the congressional campaign office of US Rep. Bobby Rush on June 1 as protests and demonstrations occurred throughout the city, Mayor Lori Lightfoot said.

(CNN) -- Thirteen Chicago police officers lounged and slept in the congressional campaign office of US Rep. Bobby Rush on June 1 as protests and looting occurred throughout the city, Rush and Chicago Mayor Lori Lightfoot said Thursday.

The officers, who included three supervisors, were seen on video lounging in Rush's office, sleeping, eating the congressman's popcorn and talking on the phone, Rush and Lightfoot said.

The incident came to light after Rush reviewed security camera footage from his office, the mayor explained at a news conference. The campaign office was broken into on Sunday, May 31, when the surrounding strip mall was looted, Lightfoot told CNN. She said the police officers entered the campaign office early Monday, June 1.

"They even had the unmitigated gall to go and make coffee for themselves and to pop popcorn -- my popcorn -- in my microwave, while looters were tearing apart businesses within their sight, within their reach," Rush said.

"They were in a mode of relaxation and they did not care about what was happening to businesspeople, to this city. They didn't care. They absolutely didn't care."

At the time, protests were taking place in Chicago in the wake of the death of George Floyd in Minneapolis. Floyd died while in Minneapolis police custody a week earlier.

The Chicago Police Department tweeted Thursday it has launched an internal investigation into the incident, and Lightfoot said they are working to identify the officers involved.

CNN has reached out to the union but has not received a response.

Lightfoot said the incident was a "personal embarrassment" for her.

"I can tell you one thing for certain -- not one of these officers will be allowed to hide behind the badge and go on and act like nothing ever happened," Lightfoot said. "Not anymore. Not in my city, not in your city."

The security video picks up around 1 a.m. on June 1 and shows the officers were in the office for at least five hours, Lightfoot said.

There was a core group of eight officers, but at one point the group grew to as many as 13, the mayor added.

"The same time that these 13 officers were popping popcorn, taking a nap, relaxing inside this office," First Deputy Superintendent Anthony Riccio said, "I was standing shoulder to shoulder with hundreds of other officers on State Street as we got pelted with rocks from rioters."

"If you sleep during a riot, what do you do during a regular shift when there is no riot?" Brown said.

Lightfoot told CNN's "AC360" on Thursday that officers are now trying to make excuses for the behavior.

"Today, literally, the officers were, through their various contacts, were trying to say the congressman actually invited us in and he's lying now," she said.

"Bobby Rush is a former Black Panther. He didn't invite the police into his office. And the fact that they would even say that -- and even assuming that was true -- five hours? When literally murder and mayhem is happening everywhere? Police officers are getting the crap beaten out of them?"

Later on June 1, the day the officers were in Rush's office, Lightfoot said attacks on local storefronts and businesses were "nothing short of devastating."

Thursday, Lightfoot said she wanted "the strongest possible action" to be taken against the officers involved and noted that the state's attorney and US attorney will review the case as well.

She also said she wants to use the incident to pass police reform legislation.

"I am ready to work with the governor, and our other great partners in Springfield, to forge a change in state law to require licensing and certification of police officers," Lightfoot said.