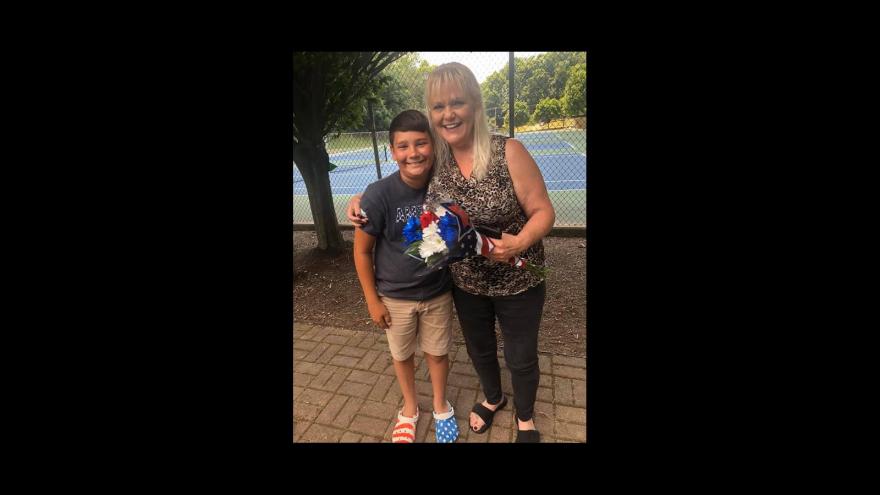 (CNN) -- A Fourth of July kayaking trip forever changed the lives of two families when 12-year-old Kolton Conrad found a dog tag that belonged to a man who died 46 years ago.

It belonged to Steven Rhonemus, a Marine veteran who died in a 1974 motorcycle crash at the age of 24. Today, the dog tag is with Rhonemus's daughter, whom he never met because she was born months after his death.

Kolton was on a trip with his father and brother on Ohio's Hocking River when they stopped to pick up trash from a sandbar. Kolton had recently started watching YouTube videos about finding lost treasures and kept an eye out for anything of value when he spotted the dog tag glimmering under the water.

Kolton, who told CNN that he is looking forward to joining the military when he is old enough, has been excited about the armed forces ever since his aunt enlisted about a decade ago. When he realized what he found, Kolton wanted to return the dog tag to the owner; but the Conrads only had one clue: the last name Rhonemus.

Kolton's mother, Ashley Conrad, took a photo of it and told CNN, "I put it out on Facebook, not knowing if we would ever find the family or we would ever know anything."

It only took a few hours for Kolton's former bus driver Crystal Potts to respond, saying that she recognized the name, and that she is a family friend. After making some calls, they realized that it had belonged to Steven Rhonemus. They connected Ashley with Rhonemus's sister Kimberly Greenlee.

Ashley Conrad suggested they meet at Rising Park in Lancaster because it is a spot where Kolton loves to fish. Greenlee was shocked because it was also one of Rhonemus's favorite places to ride motorcycles. Greenlee told CNN that he "had a chopper he built himself, and he would take everybody on rides in that park all the time."

When Greenlee met the Conrads, who live in Stoutsville, emotions ran high. Kolton admitted to being nervous, and his mother tried to calm his nerves by reminding him, "you did a wonderful thing. You gave a piece back to them that they lost of their brother."

Greenlee described the moment saying, "I just threw my arms around him and wanted to cry. I was just amazed that little boy knew the deep meaning of those tags and knew what it would mean to our family. I just hugged and hugged him."

After leaving the Conrad family, Greenlee went home and said that she sat on her bed holding on to the dog tag, crying, and thinking of her niece Danielle Jewell. Not only did she never get to meet her father, but a house fire destroyed his belongings, and she grew up with only five pictures of him.

Greenlee wanted to give the dog tag to Jewell, who lives in Lancaster, Ohio.

When her aunt called to tell her about Kolton's discovery, Jewell told CNN, the news brought her to tears. "I'm not sure why now, 46 years later this came about, I've always felt like maybe he was watching over me and I felt like maybe this is a sign that he is with me still."

Jewell, 46, wanted to thank the Conrads.

"I really do appreciate them returning it to us. They didn't have to do that. They could have kept it, especially a young boy who's into the military finding a dog tag. It's surprising they would go out of their way to make sure it got back to the family."