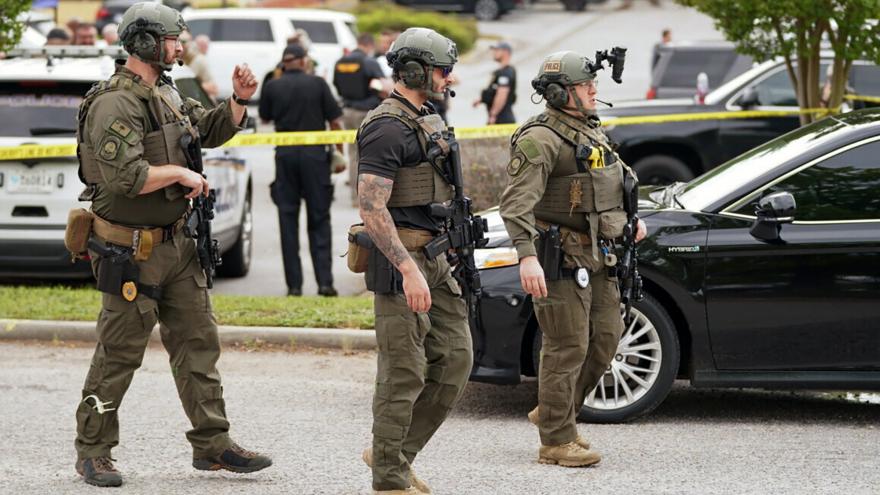 (CNN) -- Twelve people were injured and three people have been detained following a shooting at a Columbia, South Carolina, mall on Saturday afternoon, police said.

The incident occurred on the premises of Columbiana Centre Mall, said Columbia Police Chief William H. "Skip" Holbrook. There were no fatalities reported from the shooting, he said.

Holbrook said three armed people were detained by police, although it is not clear how many people actually fired a weapon. Police believe the shooting was not a random attack, he added.

"We believe the individuals that were armed knew each other, and there was some type of conflict that occurred which resulted in gunfire," Holbrook said in a Saturday afternoon news conference. "This was not a situation where we had some random person show up at a mall to discharge a firearm and injure people."

Of those injured, 10 received gunshot wounds, with eight who were transported for treatment and two who were self-transporting for care, according to Holbrook.

Nine of the 12 people who were injured in the shooting have been released from the hospital, according to medical provider Prisma Health.

"Of the 11 patients received in Prisma Health hospitals in the Midlands, nine have been treated and released," Prisma Health spokesperson Tammie Epps said Saturday evening. "Two patients were admitted."

"Prisma Health sends its thoughts and prayers to everyone impacted by the incident at Columbiana Centre Mall including our first responders," said Epps.

According to Columbia police, another victim was taken to Lexington Medical Center. CNN has reached out to that hospital for information.

The oldest shooting victim is 73, Holbrook said, and the youngest is 15.

Two of the gunshot victims are in critical but stable condition, he said, and six are in stable condition. Two people suffered non-gunshot-related injuries in what Holbrook described as a "stampede" after the incident.

Police learned about the shooting after receiving a call about gunfire at the mall near the Gap store, Holbrook said.

"We're asking that the public stay out of the area," Holbrook said.

Mall officials issued a statement that was posted by Columbia police on Twitter that said, "Today's isolated, senseless act of violence is extremely upsetting, and our thoughts are with everyone impacted. We are grateful for the quick response and continued support of our security team and our partners in law enforcement."

"We know a lot of people saw different things. Please take a moment, collect your thoughts and reach out to law enforcement," Holbrook said on Twitter.

The mall's main entrance is closed, according to CNN affiliate WIS. Parts of I-26 near Harbison, South Carolina, are closed, WIS reported.

"Employees inside the mall who were told to shelter in place for safety, law enforcement officers will come to you as a protected escort. DO NOT leave a store until told to do so by proper authorities," Columbia police tweeted.

Police were also asking those inside the mall to call law enforcement and inform dispatchers of their location. Officers were working to evacuate the mall after reports of shots fired.

A reunification site has been set up near the mall, according to the Lexington County Sheriff's Department. The site is being opened for "those with loved ones involved in the Columbiana Mall shooting," the department tweeted.

The reunification site is the Fairfield Inn at 320 Columbiana Drive.

Authorities are asking those in the area to be cautious as it will be a "high-traffic area."

Correction: An earlier version of this story mischaracterized the status of three people connected to the shooting. They have been detained by police.