11 officers responded to Uvalde shooting within 3 minutes, source says, as new reports reveal how authorities then waited to engage 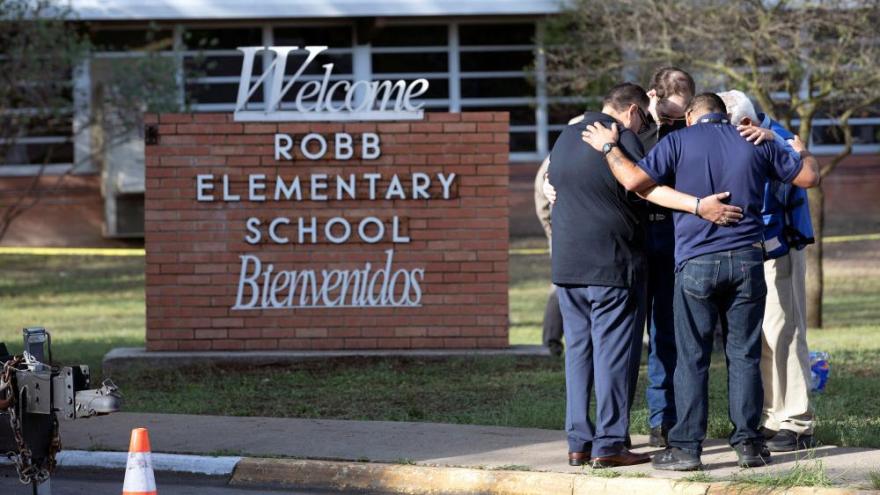 (CNN) -- Eleven officers -- including Uvalde school district police chief Pete Arredondo -- were inside Robb Elementary within three minutes of a gunman entering on May 24, a law enforcement source close to the investigation tells CNN, as new reports provide a closer look at what officers were doing as they waited more than an hour to confront the shooter.

After the gunman fired at officers and holed up in connecting classrooms 111 and 112, where he shot and killed 19 students and two teachers, officers remained stationed in an adjacent hallway.

Arredondo, who has been identified by other officials as the incident commander on scene, had previously told the Texas Tribune that officers had found the classroom doors were locked and reinforced with a steel jamb, hindering any potential response or rescue. Efforts were made to locate a key to unlock the door, he said.

Yet preliminary evidence suggests none of the officers had attempted to open either of the doors until moments before taking down the gunman, according to the source and revealed among other details in reporting from the Texas Tribune and the Austin American-Statesman.

The school police chief and local authorities have faced fierce criticism over the length of time elapsed before the gunman was killed and first responders were able to reach the victims. The gunman entered one of the classrooms at 11:33 a.m. and began firing, according to a timeline from the Texas Department of Public Safety, and was there when he was killed by officers at 12:50 p.m.

A review of surveillance footage and transcripts of radio traffic and phone calls by the Tribune -- which says details were confirmed by a senior official at the state's DPS -- put the gunman shooting inside classroom 111, briefly walking out the door, then reentering and opening fire.

Within moments of the gunfire burst, 11 officers arrived on the scene, according to the Tribune report and confirmed by the law enforcement source to CNN.

Arredondo called the Uvalde Police Department's dispatch by phone shortly after the gunman fired at officers, according to the source, requesting further assistance and saying he did not have his radio on him.

Citing a transcript, the Tribune notes that "by the time Arredondo called dispatch, at least 11 officers had entered the school and at least two are seen in the video carrying rifles. But Arredondo told the dispatcher that he didn't have the firepower to confront the lone gunman."

One security footage image obtained by the Austin American-Statesman shows at least three officers in the hallway -- two of whom have rifles and one officer who appears to have a tactical shield -- at 11:52 a.m., 19 minutes after the gunman entered the school.

"If there's kids in there, we need to go in there," one officer said, according to the American-Statesman. Another officer responded, "Whoever is in charge will determine that."

At least one of the officers is noted at 11:50 a.m. believing Arredondo was leading law enforcement response inside the school, telling others, "The chief is in charge," according to the Tribune. Arredondo had previously told the Tribune he did not consider himself the incident commander that day.

Officers had access to four ballistic shields inside the school, the Tribune said citing a law enforcement transcript, the fourth of which arrived 30 minutes before officers stormed the classrooms.

In the first minutes of their response, an officer also said a Halligan, a firefighting tool that is used for forcible entry, was on scene, according to the Tribune. However, the tool wasn't brought into the school until an hour after officers arrived and was never used, the Tribune said.

Toward the end of the standoff, according to the law enforcement source, Arredondo wondered aloud whether officers would consider "popping him through the window." A body camera transcript showed Arredondo indicating to other officers at 12:46 p.m. that if a SWAT response team was ready, they should breach the door, an action that came four minutes later.

CNN has reached out to both Arredondo's attorney, George Hyde, and the Uvalde Police Department regarding the reports.

A Texas House committee investigating the school shooting meets again in Austin on Tuesday, with witnesses set to include Col. Steven McCraw, the head of the Texas DPS.

McCraw is due to describe evidence taken from surveillance video inside the school, and will also bring a physical door from Robb Elementary to demonstrate its locking mechanism, according to the law enforcement source close to the investigation.