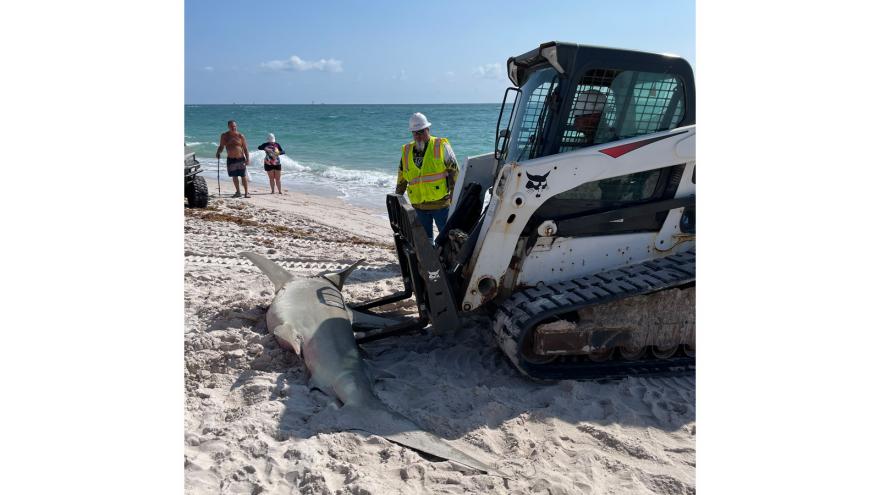 (CNN) -- An 11-foot hammerhead shark washed up on a beach in southern Florida, much to beachgoers' surprise.

Visitors at Pompano Beach, north of Fort Lauderdale, encountered the shark's corpse on April 6, according to CNN affiliate WPLG.

A team of scientists from the American Shark Conservancy took samples and identified the shark as a female great hammerhead, after moving the body away from onlookers.

Hannah Medd, a conservation scientist and the founder of the American Shark Conservancy, told CNN that she and her team took the shark's measurements as well as fin clippings to test its DNA and muscle tissue for biopsies. The female was pregnant and weighed around 500 lbs, she said.

The Conservancy, which has a license to take samples from protected species like the hammerhead shark, was alerted to the animal by the Broward County Sea Turtle Conservation Program, which surveys for turtle nests on beaches. A member of the team had encountered the body with a hook in its mouth. The "specific type of hook usually indicates someone was fishing for a large animal like a hammerhead," Medd said.

"This species, in particular, is quite susceptible to stress," she said.

Medd explained that a small community of recreational fishermen target sharks for catch-and-release, which is legal in Florida, although the sharks cannot be harvested. But the stress of catch-and-release, combined with wounds from fishing hooks, can sometimes lead to death.

"This is a pretty rare event," Medd said. "We get a call for maybe one to four a year [hammerheads] that have washed back up."

She said that her team has advocated for best catch-and-release practices, like using stronger fishing gear, which reduces the "fight time" during which the sharks are struggling with fishermen. Less fight time means less chance of injury or mortality.

"These sharks are really good at fighting," she said. "That's why the anglers like to catch them -- it's exciting."

She added that "because they're prohibited, we typically can't get samples, so in this case it was an unfortunate but good chance for us to learn more about a pretty important species."

After the biologists took their samples, a nearby construction crew dug a hole and buried the shark on the beach, said Medd.

Some beachgoers had emotional reactions to the dramatic sight of the shark washed up on the shore. Medd said she saw some witnesses crying.

"You never want to see an animal this big laying on the beach," said Pompano Beach resident Kevin Nosal, according to WPLG. "This is 11 feet long and over 500 pounds. It's a female, so it's always sad when a female passes."

Great hammerhead sharks are common in the coastal waters around Florida, according to the Florida Fish and Wildlife Conservation Commission. They can reach as long as 18 feet and live for more than 20 years. The fish are sometimes targeted by commercial longline fishermen for their fins, says the commission.

As a predator, hammerhead sharks wield important influence on the ocean ecosystems, according to Medd. "They're just a very important piece of that food web that keeps our oceans healthy."

"Even people enjoying a day at the beach like to see healthy oceans and coastlines," she said. "Sharks are actually a part of that."