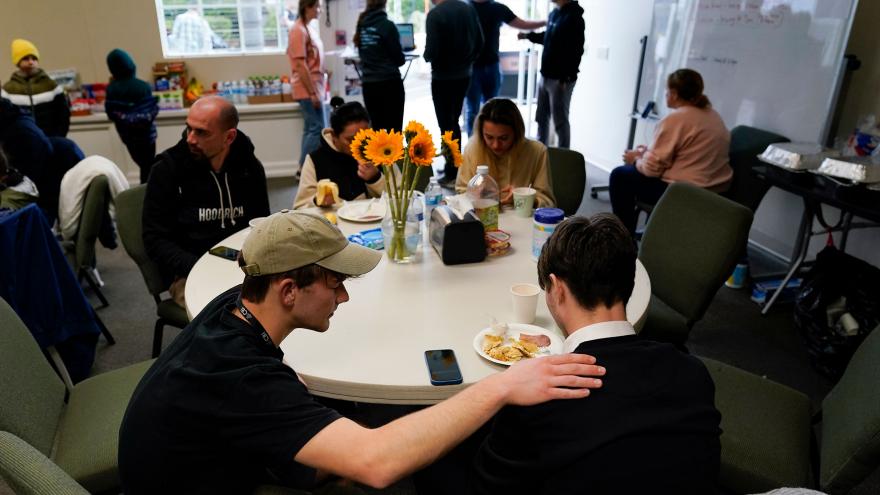 (CNN) -- Phil Metzger flew home to California from Ukraine soon after the war broke out, devastated by what he saw.

He'd been helping deliver medicine and evacuate families from danger, and the evangelical pastor knew he wanted the church he leads in suburban San Diego to do even more to help those in need.

He never expected the crisis would end up coming to them.

"Who would ever imagine that a pipeline into America (for Ukrainians) would open through Mexico?" Metzger says. "That just caught us all completely off guard."

Calvary San Diego is in Chula Vista, California, about 8 miles north of the US-Mexico border. And as a growing number of Ukrainians were crossing the border from Tijuana to seek refuge in the United States, Metzger saw it as an opportunity to turn the church's beliefs into action.

"Jesus said love your neighbor as yourself. Right now, these are our neighbors," Metzger says. "They're literally showing up in our backyard."

Over the past six weeks, Metzger says thousands of Ukrainians crossing the border have spent at least a night inside his church, and hundreds more have stayed at the homes of church members.

About 100 people connected to Calvary -- including members and their families -- opened up their homes to give the new arrivals a comfortable place to stay for a night or two. Many also volunteered to make airport runs, dropping off families who were continuing their journeys to meet up with relatives across the US.

Metzger already felt a personal connection with the Ukraine conflict. He was based in Budapest for 20 years, made many friends in Ukraine and still helps oversee churches in the region for the wider Calvary network. But this experience, he says, has created even deeper ties for his community.

"It's been life-changing," Metzger says, describing what happened when Ukrainians began sleeping in his church, attending services and ultimately, changing his church's perspective on the world.

One weekend, Metzger says there were so many Ukrainians at the church that they held the service in Russian. Many have prayed together with their host families. A few recently got baptized.

The whirlwind of arrivals passing through his church seems like it's about to end, Metzger says, since the Biden administration is advising Ukrainians to stop journeying to Mexico to reach the United States. Federal officials now are rolling out a program that creates a more streamlined online application process for those seeking temporary refuge in the US.

As details about that new effort emerge, Metzger and members of his congregation say they're eager to share what they've witnessed in one corner of California.

"There are so many things happening in the world, and we can't be aware of everything. But this," he says, "is an area that God gave us open doors to see."

It's still heartbreaking for Ana Casillas to think about one of the first Ukrainian families who came through the door of her home. There was a 2-year-old child -- the same age as Casillas' daughter. The boy was struggling, Casillas says. "Just crying and crying."

She learned they'd left his mom behind in Ukraine because she didn't have a passport and had no way to travel.

Casillas, a biochemist, imagined how she'd feel if a war forced her and her daughter to separate.

It was one of many harrowing stories she says she's heard from the Ukrainian families she's hosted.

Another family told her their parents were trapped in Russian-occupied territory, scared for their lives but unable to flee.

Others described long journeys through multiple European countries, flights to Mexico and long waits at the US border. One family said they'd lost what little luggage they had along the way.

"Effectively they lost everything they owned," Casillas says.

She sent a message to her friends telling the family's story, sharing their clothing sizes and asking for donations.

When the family left her house, their new suitcases were full.

Nick Roach wasn't sure what to expect when his family of eight signed up to welcome Ukrainian families into their home.

But the retired NFL linebacker, who played for the Chicago Bears and Oakland Raiders, knew many of the new arrivals would be in shock, upset and depressed.

"Just when they arrived here," he says, "their hometowns and villages were getting destroyed."

What would they need? Would his family be able to do enough to help? And how would they connect with each other?

One key way to unlock the answers, he soon learned, was Google Translate. While interpreters were on hand to help families with travel arrangements and other plans at the church, host families have turned to technology to bridge the language gap.

And even with only Google Translate as a go-between, families have opened up and found common ground.

Merridith Cho's family of 10 has hosted several Ukrainian families in recent weeks, and Cho says she's been amazed by all the unexpected moments of connection. She says she'll never forget the woman who told her about the shop she left behind in Ukraine. Cho, a stay-at-home mom, learned the woman has been making dresses for over 20 years. She showed Cho a photo of an elegant, hand-sewn gown.

"I was doing that until our world stopped," the woman told her. "We just had to walk away from everything."

Cho's 12-year-old daughter Emma ran upstairs to get a quilted backpack she'd just made and show it to their guest.

Even though they didn't speak the same language, they shared a love of sewing.

After hosting about a dozen families in their home, Nick and Anna-Marie Roach's children now can rattle off a few words in Russian and Ukrainian. But translation hasn't been necessary for them.

"The kids all played together," Anna-Marie Roach says. "Toys and running around are a common language."

Host families from Calvary San Diego have snapped photos of their kids joining Ukrainian children to share toys, spar in Nerf-gun battles and bound barefoot along the beach. Casillas recorded a video that shows a group of children in her backyard, piling onto a swing, twisting it around and squealing with glee as they spin together.

But as easy as it is for kids to connect, some of these American parents have found it hard to explain to their children why the Ukrainians are fleeing in the first place.

Casillas says she tried to break the issues down into terms her 5-year-old son would understand.

"I explained to him there's a bad guy that's destroying people's homes, so they need to find a new home. So they're going to stay with us for a day or two until they can go to their new home," she says.

Her son responded with a question Casillas struggles to answer: "He's so mean. Why is he destroying people's houses?"

They see this as another chapter in the American story

Casillas sees her own family's struggles reflected on the faces of the Ukrainian guests who arrive at her home.

She remembers coming to the United States with her parents in 1996, leaving behind everything they knew in Mexico.

"I didn't speak one lick of English. We came with two bags of stuff. We never looked back," she says. "I know what it is to come with nothing, losing all your friends and your home."

She hasn't been sharing the story with all her guests; she wants to keep the attention on them, not her. But one day, she found herself mentioning it to a Ukrainian woman who'd just arrived with her daughter. The mom said she dreamed of taking her daughter to Disneyland someday. She asked Casillas whether that would be possible -- whether their family would ever find their footing.

Casillas' dad worked for a closet-making company when they first got to the US and now owns his own business. Her mom had been trained as a pharmacist in Mexico but cleaned houses in the United States to support their family. "I can tell you that the opportunity is there if you work hard for it, if you really apply yourself," Casillas told her. "Just make sure you keep that fighting spirit of doing this for your daughter."

Other volunteers from Calvary also say hosting makes them think about the immigrant stories in their own families, too.

Merridith Cho thinks of conversations with her Korean in-laws. Anna-Marie Roach thinks of her family's journey from the Philippines to the US. Nick Roach thinks of his father, who came to the United States as a teenager from Barbados.

And as he sees the Ukrainians arriving, he thinks of the family immigration stories told by generations of Americans.

"All of us at some point in our lives we've met somebody who has some story of when their family first came to the United States, like how their grandfather came here and he had nothing and he left because of this situation in his country," he says.

Some of the Ukrainian children arriving in the US today may not speak any English, he says, but in 5 or 10 years they'll be the ones telling immigration stories of resilience and survival.

Hosts feel like they're the ones receiving a gift

Metzger says he's waiting to learn more details about how the sponsorship program will work. But there's no doubt that by opening their doors to help the arriving families, members of his congregation have received countless blessings.

"Our church sees this as a great privilege," he says. "We're benefiting from amazing human beings that are coming into our country that we get to connect to."

Casillas' family ended up getting unexpected help building an outdoor kitchen. When two Ukrainian brothers her family was hosting heard her husband was heading to Home Depot, they asked if they could join him. It turned out they were construction workers in Ukraine, and during their stay, they offered to help him with the backyard project.

"They were so happy helping," she says.

Cho says it's been a gift for her children to learn the importance of sharing what they have, and "the treasure that people are, even in the midst of horrible circumstances." She keeps thinking about one day when they took a Ukrainian family to see the ocean for the first time.

Earlier that day, the mom was weeping and "just broken," Cho says. She stayed in the family's guest room and cried. Cho offered tea and tried to let her rest. But when she learned from another family member that they'd never seen the ocean, Cho suggested loading up the van for a trip.

"I think it was exactly what the mom needed. She laughed and smiled. It just was a really amazing reprieve for a little while from their reality," Cho says.

That night, as a thank you, the Ukrainian mom and her daughter taught Cho and her daughters how to make pierogis. Cho had never prepared the Eastern European dumplings before. Now she has two containers full of pierogis in her freezer.

"My life has been so enriched and I'm so grateful," Cho says. "I don't know that I've ever had a chance to see someone's first time at the ocean before, and their reaction, and that will stick with me. And to have that shared cooking experience with our new friends and also my daughters, it just was such a treasure."

She sees echoes of a Bible story in the experience. She has read time and again about how Jesus' disciples pooled what little they had together, then saw it multiplied and given to a huge crowd of needy people.

It's a lesson Cho says she and others are putting into practice today: trying to give what little they have in the hope that, with God's help, it can make a bigger difference.