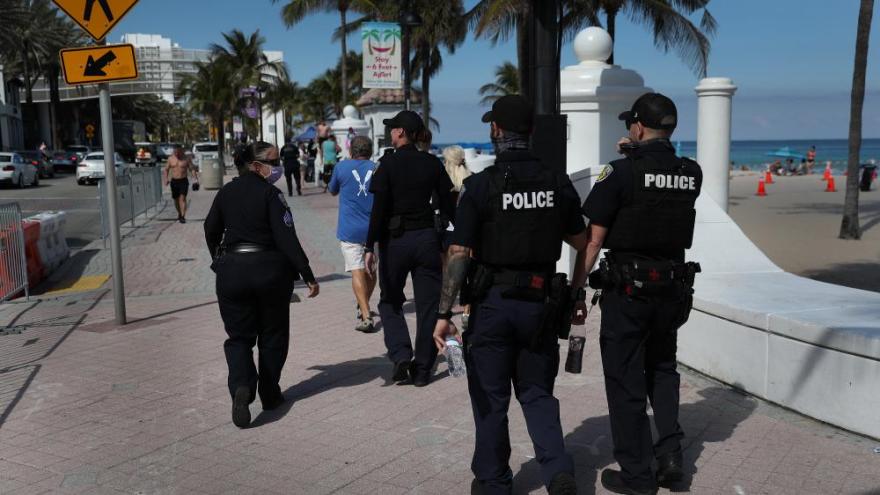 About 100 people have been arrested and two police officers injured as spring break crowds gathered in Florida's Miami Beach over the weekend.

(CNN) -- About 100 people have been arrested and two police officers injured as spring break crowds gathered in Florida's Miami Beach over the weekend, the city says.

Friday night's incident involved a large crowd which was "disorderly and surrounding officers," another tweet said. Miami Beach police tweeted that they used pepper balls to disperse the group.

The weekend's approximately 100 arrests included some for the seizure of weapons and drugs, city of Miami Beach spokeswoman Veronica Payssé told CNN on Sunday.

Spring break during a pandemic

Payssé said the issues are typical for each year's spring break crowds, but that Covid-19 protocols made the task of policing the crowds twice as hard.

The state of Florida does not allow local jurisdictions to fine people for violating mask orders, and the city can only offer free masks in hopes that people wear them, Payssé said.

Florida is a popular spring break destination, and some of its beaches have been packed.

"We are concerned," the mayor said. "It's very challenging."

Further north, in Clearwater Beach, Pinellas County, some beachgoers were trying to factor in the pandemic, CNN affiliate WFTS reported.

Jamin Stuhr -- visiting from Iowa -- said he understood how people could forget about Covid-19, but he and his friends were trying to remember.

"It's just really important to keep everyone safe especially the more prone to getting it and getting really sick from it," he told WFTS. The group said they were wearing masks on the street and staying with their own group.

Local resident Tanya Landry told WFTS she set up her chair to ensure social distancing on the beach and avoided crowds.

The Florida Department of Health reported 1,973,109 Covid-19 cases Saturday, an increase of 5,167 cases since Friday.

Cases in Florida have been on an uptick for the last five days after seeing a decline in the previous days, data from the FLDH dashboard shows.

The state's health department website shows that a majority of the new cases were from Miami-Dade and Broward counties, with more than 677 new cases reported in each county.