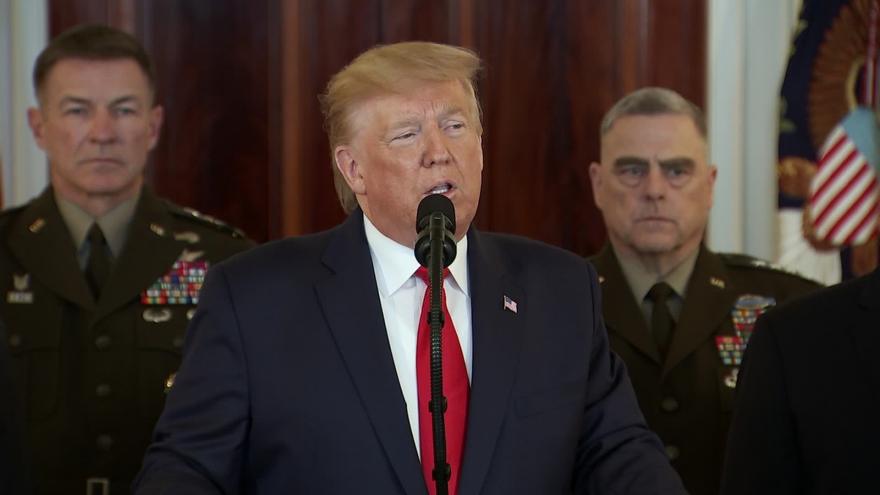 President Donald Trump, facing the gravest test of his presidency to date, struck a somber tone announcing no Americans were harmed in Iran's retaliatory attacks against Iraqi bases housing US troops.

(CNN) -- President Donald Trump, facing the gravest test of his presidency, signaled a de-escalation of tensions with Iran Wednesday in the wake of Iran's retaliatory attacks against Iraqi bases housing US troops.

"Iran appears to be standing down, which is a good thing for all parties concerned and a very good thing for the world," Trump said, striking a somber tone during his White House statement.

An early warning system worked well and no American or Iraqi lives were lost, Trump said.

Trump appeared to be positioning the US to de-escalate, but offered very little room for Iran to maneuver, essentially sticking to a maximalist approach and demanding that any de-escalation happen on US terms. Reading carefully from teleprompters, Trump announced that his administration would once again slap Iran with more sanctions and demanded that US allies leave the nuclear deal so a new pact can be negotiated.

The President's remarks set out no basic change from an administration strategy that has sharply ratcheted up tensions over the last year, putting the region on edge and bringing the US and Iran to the brink of war in the first days of the new year.

"The United States will immediately impose additional punishing economic sanctions on the Iranian regime," Trump said, noting his administration is continuing to review other options to respond to the Iranian missile strike on Tuesday.

"These powerful sanctions will remain until Iran changes its behavior," he added. "In recent months alone, Iran has seized ships in international waters, fired an unprovoked strike on Saudi Arabia and shot down two American drones." 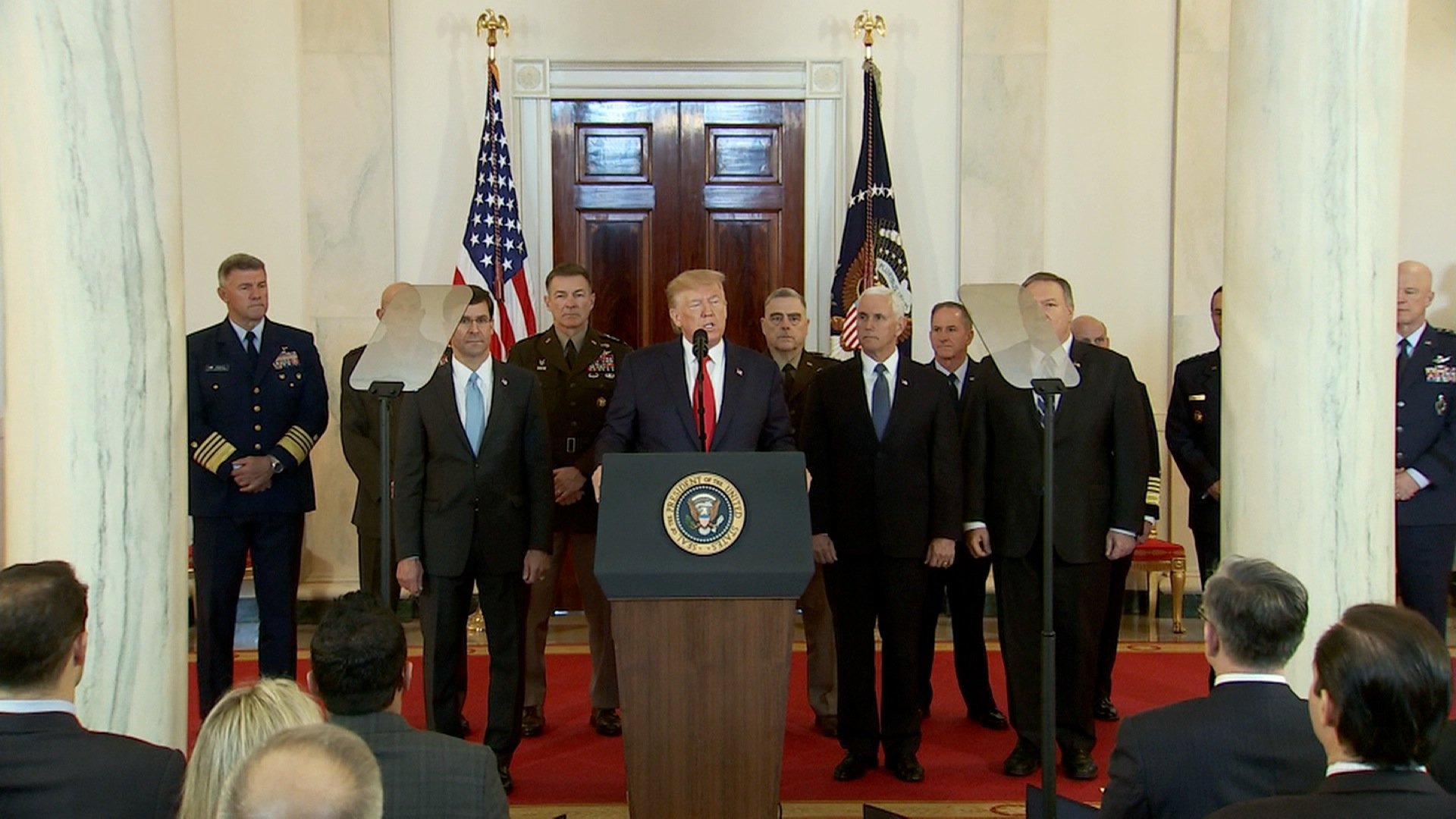 "Our missiles are big, powerful, accurate, lethal and fast," he said, a warning tucked into a speech that otherwise indicated an easing of strain.

"The fact that we have this great military and equipment, however, does not mean we have to use it," Trump said. "We do not want to use it. American strength, both military and economic, is the best deterrent."

Iran fired a number of missiles at two Iraqi bases housing US troops Wednesday local time in retaliation for the American strike that killed a top Iranian general last week.

Ahead of Trump's remarks a growing belief emerged among administration officials that Iran deliberately missed areas populated by Americans.

Multiple administration officials told CNN that Iran could have directed their missiles to hit areas that are populated by Americans, but intentionally did not. Iraq did receive advance warning that the strike was coming and was able to take "necessary precautions," according to a statement from Iraq's Prime Minister Adil Abdul Mahdi. A US defense official said that Iraq, in turn, gave advance warning to the United States.

Iraq's joint military command said there were no casualties among Iraqi military forces.

Iran targeted the al-Asad airbase, which houses US troops, and American and coalition forces in Erbil, according to Jonathan Hoffman, a Pentagon spokesperson. Trump had visited al-Asad in December 2018.

Trump tweeted Tuesday night that he would make a statement Wednesday morning.

"All is well!" Trump tweeted. "Missiles launched from Iran at two military bases located in Iraq. Assessment of casualties & damages taking place now. So far, so good! We have the most powerful and well equipped military anywhere in the world, by far! I will be making a statement tomorrow morning."

The administration officials who discussed Iran's targeting suggested that Tehran's leaders may have intended to send a message rather than take action significant enough to trigger a US military response, a possible indication that the White House is looking for a rationale to calm tensions.

The attack came days after the US killed top Iranian general Qasem Soleimani in an airstrike in the Iraqi capital of Baghdad. The administration sought to cast the strike as an attempt to de-escalate tensions with Iran, but Tehran has described it as an "act of war" and "state terrorism." Soleimani had been the second most powerful official in the country.

In a televised speech to Iran Wednesday, Supreme Leader Ayatollah Ali Khamenei addressed the missile attacks and said Iran had given the US "a slap in the face last night."

He added that America had cast Soleimani as a "terrorist," which was "unjust and unfair."

The Islamic Revolutionary Guards Corps, an elite wing of the Iranian military with immense political and economic power, said in a statement that the attacks on Iraqi bases were "hard revenge" for Soleimani's death. The IRGC said any country housing US troops could be subject to "hostile and aggressive acts" and called on American citizens to demand the administration remove US troops from the region.

It warned the US: "If you repeat your wickedness or take any additional movements or make additional aggression, we will respond with more painful and crushing responses."

Iran sent Iraq "an official verbal message" about the missile attacks shortly before midnight on Wednesday, according to a statement from Mahdi.

He said that Iraq was told that: "The strike would be limited to the whereabouts of the US military in Iraq, without giving the exact location." Iraqi military leaders were warned "to take the necessary precautions."

The prime minister said that Iraq had received no official information on losses from coalition forces.

In recent days, US bases have been on high alert due because of indications Iran might attack. A US military official told CNN the military had enough warning of the launches to sound alarms and people in harm's way were able to get to safety.

Iran warns the US

"Iran took & concluded proportionate measures in self-defense under Article 51 of UN Charter targeting base from which cowardly armed attack against our citizens & senior officials were launched," Zarif said. "We do not seek escalation or war, but will defend ourselves against any aggression."

The rockets pose a direct challenge to Trump, who threatened Iran on Tuesday, just hours before the attacks began.

"If Iran does anything that it shouldn't be doing, they will be suffering the consequences and very strongly," the President said.

In the immediate aftermath of Soleimani's killing, Trump repeatedly stressed that the deadly drone strike was meant to reduce violence.

"We took action last night to stop a war," he told reporters a day after the attack. "We did not take action to start a war."

This story has been updated with additional breaking news developments.