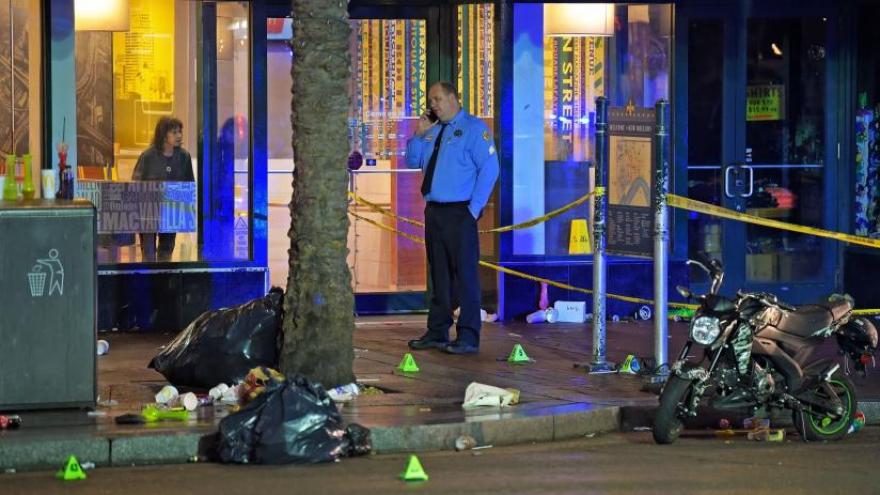 A woman looks out from a McDonald's as police investigate the shooting scene Sunday. Credit: Max Becherer/ The Times-Picayune/The New Orleans Advocate via AP

(CNN) -- Police are still looking for a shooter who injured 10 people in New Orleans, and investigators believe the suspect is an out-of-towner who was engaged in an earlier altercation, Police Superintendent Shaun Ferguson said Monday.

One person was detained near the shooting on the edge of the city's historic French Quarter but was later released, police said without elaborating.

The early Sunday shooting appears to have stemmed from a dispute between two people who are from Louisiana but not from New Orleans, the superintendent said. A firearm was recovered at the scene, he said.

Ferguson said the five men and five women injured were between the ages of 16 and 36.

One victim required surgery, which was successful, and remains in critical condition, said Emily Nichols, the city's director of emergency medical services. The other nine victims are in stable condition at area hospitals, she said.

Ferguson said Sunday that two patients were in critical condition after being shot in the torso. No officers were injured, he said.

Crimestoppers has announced a $10,000 reward for information leading to the arrest and conviction of those responsible.

Police do not know what led to the shooting, but six officers and a supervisor were already on scene when the shooting started around 3:20 a.m. They were in the area because the Bayou Classic, an annual rivalry football game between Grambling State and Southern University, draws large crowds to the city.

"We had officers right there within that very block that actually thought that they were being fired upon and took a position to respond to this," Ferguson said.

A witness who wished to remain anonymous told CNN he was on the same block, across Canal Street, when the gunfire erupted.

He heard a verbal altercation and "at least" five or six gunshots, and he saw sparks, but because of the large crowd he could not see where the shots came from. People ran from the location, some toward the waterfront, and were in such a panic that they were tripping and falling on each other, the witness said.

The FBI is coordinating with the New Orleans Police Department in its investigation, officials said.

Police are reviewing surveillance, talking to witnesses and asking anyone who may have seen something to contact police.

"The shootings on Canal Street early this morning were an ugly disruption of an otherwise beautiful holiday weekend," Mayor LaToya Cantrell said in a tweet Sunday. "We will do everything we can to wrap the victims and their families in our love and support, and to bring the criminals responsible to justice."