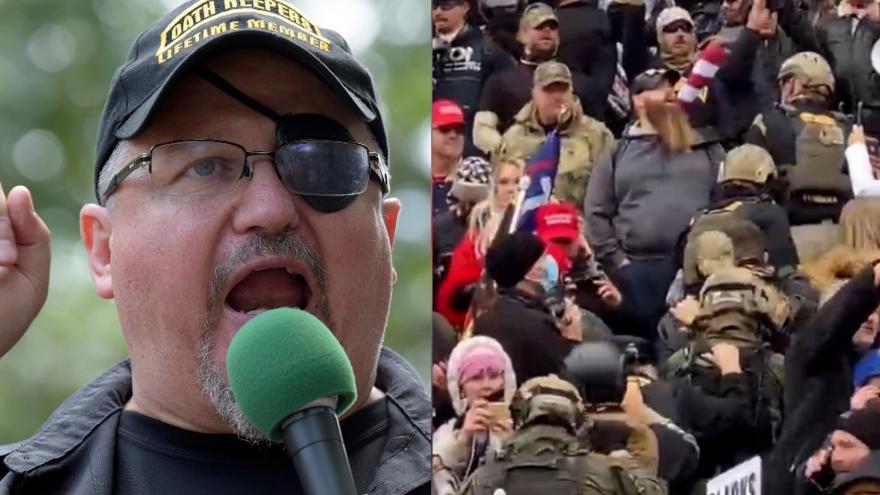 Ten Oath Keepers, including leader Stewart Rhodes, pleaded not guilty to new charges, including seditious conspiracy, related to the January 6, 2021, attack at the US Capitol.

(CNN) -- Ten Oath Keepers, including leader Stewart Rhodes, pleaded not guilty on Tuesday to new charges, including seditious conspiracy, related to the January 6, 2021, attack at the US Capitol.

Another defendant, Edward Vallejo, was not present at the hearing and did not enter a formal plea.

The Justice Department unveiled the indictment against the 11 Oath Keepers charged with sedition in early January, though most had faced other charges already. The indictment alleges that the far-right group recruited members, stocked up on weapons and organized to disrupt Congress' certification of the 2020 election and keep then-President Donald Trump in power.

Rhodes, according to the indictment, told his followers that "We aren't going through this without civil war. Too late for that. Prepare your mind, body and spirit," in a November 5, 2020, Signal message. In December, Rhodes again allegedly warned the group that "there is no standard political or legal way out of this."

Oath Keepers from across the country, according to prosecutors, began to plan for violence in DC. One member, Caldwell, claimed to take a reconnaissance trip to DC before January 6. Others, including Vallejo, stashed weapons in a Virginia hotel as part of a quick reaction force.

On January 6, prosecutors allege that Oath Keepers split up -- some at the Capitol, others providing security and a third group waiting across the river in Virginia with the cache of weapons.

After the attack at the Capitol, Rhodes allegedly spent more than $17,500 on weapons, equipment, and ammunition and told associates to organize local militias to oppose the Biden administration.