10 lessons learned in a year of Covid-19 lockdown 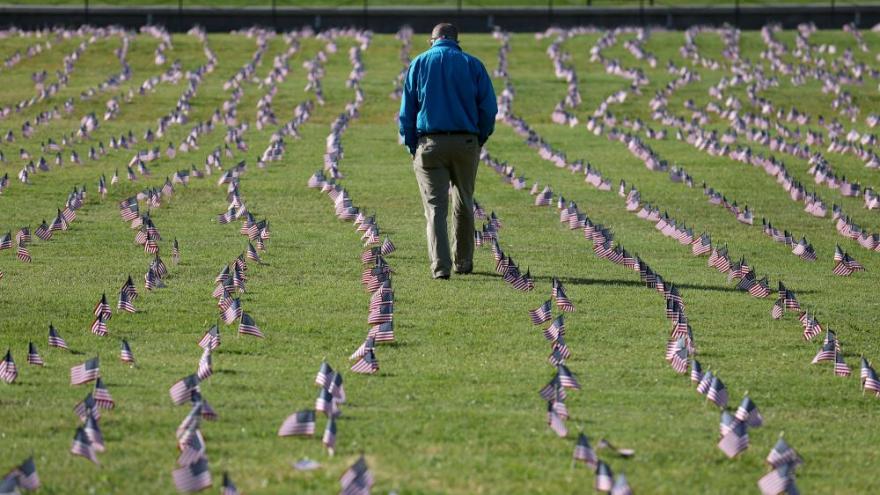 Chris Duncan, whose 75 year old mother Constance died from COVID on her birthday, walks through a COVID Memorial Project installation of 20,000 American flags on the National Mall as the United States crosses the 200,000 lives lost in the COVID-19 pandemic September 22, 2020 in Washington, DC.

(CNN) -- It's been hellish, and it will likely go down as the toughest stretch in many Americans' lives.

One year ago Saturday, the country went into its first stage of lockdown, though some adhered to guidelines better than others. Three hundred and sixty-five days later, Covid-19 has snuffed out more than 530,000 lives in the world's most prosperous country -- roughly one-fifth of the global death toll.

It's not over, but as the nation marks a dubious anniversary, hope bobs on the horizon. Three vaccines have emerged as valuable weapons in the fight against coronavirus.

Despite a bumpy rollout campaign in some states, many foresee a summer filled with hugs, dining out, vacations, concerts, sporting events, beers at bars, worship services, in-person learning, parties, museums and packed movie theaters -- among other pleasures that we took for granted.

After receiving his second dose of vaccine, Joe Sanders, 93, of Princeton, West Virginia, told CNN last month that he didn't have audacious plans; he was simply looking forward to slipping out of the nursing home, where he'd been confined for his safety, for a little country ham and red-eye gravy.

"I was just really relieved, and I have hope that I'm going to get out of here and do some things," Sanders said. "That kind of sustains you, instead of feeling you're going to be here till the end."

Hope, too, has been a valuable weapon. It's one of many things Americans have learned in the last 12 months.

It wasn't always pretty. The pandemic has exposed our swagger, and also our naivete and divisions, but we learned to adapt to the most devastating episode in recent history.

Not only did we acclimate to the jarring disruptions that came with pandemic life -- at work, at school, in our social lives -- we did it while navigating the busiest hurricane season on record and a long-simmering racial reckoning.

It was far from a uniform effort, but by all accounts, we showed our mettle, our resilience. The overwhelming majority of us kept donning masks and avoiding large gatherings to keep ourselves and others safe until the cavalry arrived in the form of vaccines.

Recovery appears near, but we would do well to remember those among us who lost loved ones and livelihoods. They could have been any of us, and for them, the effects of the pandemic will linger long after the final vaccination phase. The best prescription? Some collective compassion.

What we're willing to sacrifice in a catastrophe runs the gamut from almost nothing to just about everything.

Even the leaders most vocal on the virtues of masks, distancing and staying home couldn't help heading to the hair salon or a Michelin-star restaurant. They set a terrible example, but their temptations aren't foreign. Who among us didn't want an inch or two trimmed off, or some expertly prepared surf and turf?

Still, many of us decided we could wait. Super-spreader events snared the headlines, but beneath the media spotlight were tens of millions of people giving up the favorite parts of their lives to save others.

Not everything was a choice, of course. Many businesses shut down. Hospitals and nursing homes banned visitation. Events were canceled and travel banned, but we would be remiss to ignore the accompanying sacrifices that amounted to tiny acts of heroism and doubtless saved myriad lives.

Knowing a loved one is dying alone is excruciating, as is not being there to help ease their pain. Saying farewell via Zoom or from a parking lot is heartbreaking.

Before the pandemic, there was an epidemic of isolation and depression among seniors, and the nation got low marks in general for how it cared for its elderly. Older Americans were already missing physical touch and seeing people's faces more than most. The pandemic magnified these shortcomings in profound ways.

Coronavirus homed in on the elderly with particularly deadly effect, and Americans were slow to step up and protect them. Take Gov. Andrew Cuomo, initially considered a stalwart and model of Covid-19 response: He now faces allegations he obscured the death toll among New York's nursing homes.

America isn't exceptional here. In September, many months into the pandemic, the World Health Organization director-general expressed disappointment in hearing a colleague say the massive global death toll was "fine" because the victims were mostly old.

"No, when the elderly are dying, it's not fine. It's a moral bankruptcy," Tedros Adhanom Ghebreyesus said. "Every life, whether it's young or old, is precious and we have to do everything to save it."

The takeaway: We can take much better care of our elders.

Covid-19 highlighted the necessity of many professions. At the top of the list, health care professionals and teachers are underpaid, while doctors take their Hippocratic Oath seriously, too often at their peril.

Those employed in agriculture and the restaurant and grocery industries, as well as delivery drivers, are vital to keeping people healthy in times like these. Janitors, police and social workers also put their safety on the line.

In a nation that places immense, some might say lopsided, value on athletes and celebrities, the pandemic forced a re-evaluation of priorities, of who is essential. Now that Covid-19 has laid that bare, will it stick?

This was supposed to last only a few weeks. For all the detriment the pandemic delivered, we showed we can pivot.

We now know just about anything can be delivered to our doors. We've learned how to socialize online, or on a porch or yard -- BYOB, of course. Work from home and remote learning haven't been ideal -- in fact, they've been quite taxing for many -- but we've found ways to make them work, and in some cases, better.

Living rooms, dining rooms, basements, spare bedrooms and backyard sheds have become (almost) functioning office spaces. Neighbors have banded together to form pods, where children can connect with their teachers from afar, while easing the burden on parents who still have to work and pay bills, no matter the state of the world.

At the same time, the effects of the lockdown preyed on the same racial and socioeconomic disparities as many of society's ills. Many feel the education gap has widened. Though we've all felt like tearing our hair out, we're still assessing the pandemic's actual influence on mental health, and experts worry about the ripple effects on Generation C, the Covid generation.

Technology has been immensely helpful, whether it's leading us to the nearest vaccine clinic, sending a grocery list to a delivery service, entertaining ourselves, remotely seeing doctors and therapists, educating our kids or connecting with our friends, family and coworkers. We also learned a lot of those meetings could've been emails.

But it hasn't all been smooth.

The tech landscape tilted away from the have-nots, denying many access to important innovations. Social media is a blessing and a curse. Video conferencing get old quickly. Ordering in isn't as gratifying as dining out. In-person worship trumps watching services on a laptop. "Wonder Woman 1984" and "Tenet" would've been more fun in the theater. And while we owe D-Nice, Post Malone, Norah Jones and others our gratitude for the distractions they offered us, nothing replicates live music.

Science is amazing and, in many ways, is the only thing that can save us, regardless of whether we believe in it. Science, of course, yielded several vaccines in record time and provided us with vital guidance on how to protect ourselves.

Too many opted to ignore the latter, but those who heeded the science can take some credit for helping save lives.

We learned, however, that science doesn't always move as hastily as the problems it aims to solve. More worrisome is that when science is emerging, some will exploit uncertainties for political ends, and even our best experts can get the guidance wrong when the science is new and fuzzy.

In the Age of Internet, when most of the answers to life's questions are a few keystrokes away, some of us still struggle to reach truth and facts. This isn't new. In 2017, CNN felt the need to launch a house ad campaign targeting those who peddle in disinformation.

The struggle to find truth has dealt us deadly consequences during the pandemic. Exacerbating matters have been those of us who feel so strongly about our civil liberties we are willing to risk hurting ourselves and others. Add to that scurrilous characters who will politicize anything, cheered on by the leaders they put into power and others who put the economy over lives, and you have a toxic recipe for handling a deadly outbreak.

This has put on exclamation point on something many already knew: The truth cannot be chosen, but many think it can.

9. On strength and coming together

We can put politics aside when disasters, such as the aforementioned hurricanes or the snowstorm that almost knocked out Texas' power grid, leave us in danger.

We often can't rely on politicians to bail us out (not like corporate America can). Some leaders may jet off to Utah or Cancun when calamity strikes or dither over relief checks while people are getting sicker, getting hungrier or the power bill's due, but in many ways, we can rely on our fellow Americans.

Amid the headlines chronicling bad behavior were stories of selflessness and triumph: restaurateurs feeding the hungry, doctors treating the poor, musicians offering respite from the chaos, volunteers aiding ex-convicts or addicts, among so many others.

It raises an important question about how we, as a country, define strength: Is it clinging to our freedom, consequences be damned, or reaching out and sacrificing -- even enduring a cumbersome mask -- to ensure the safety of our fellow Americans?

There's an old saying about history repeating itself, and there's no reason to believe it won't apply in post-pandemic life.

If we engage in denial or fail to heed the lessons handed us, we could do this all over again -- and maybe sooner than we'd like.