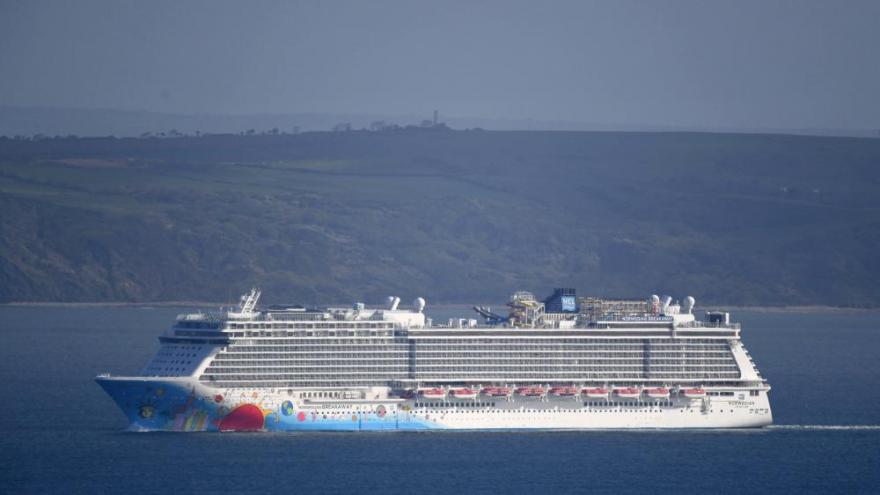 10 Covid-19 cases are identified on a New Orleans-bound cruise ship. The Norwegian Breakaway is shown here entering the Portland Port near Dorset, England.

(CNN) -- Ten cases of Covid-19 were identified on a Norwegian Cruise Line ship that disembarked in New Orleans on Sunday, the city said.

All crew members and passengers are fully vaccinated and all 10 cases are asymptomatic, the cruise line said in a statement.

"Governor John Bel Edwards, the Louisiana Department of Health, the City of New Orleans and the Port of New Orleans are aware and working closely with the Centers for Disease Control and Prevention (CDC) to initiate existing COVID-19 agreements and protocols with the cruise line," the city said in a news release Saturday.

Wade Berry said he was on the ship with three friends, celebrating his recovery from cancer, but he didn't hear about the positive cases until he read the statement by the New Orleans mayor's office that his sister sent him.

Everyone on board was tested Saturday, while the ship was still at sea, Berry told CNN as he traveled from New Orleans to his home in Dallas on Sunday.

"We have been on two cruises prior to this one and we didn't have to do one. It was very shocking and completely out of the blue." Berry said he thought it was due to new government rules requiring testing.

When he asked the ship's medical team about the cases, he was told he would have been notified and isolated if he had tested positive.

"I do think they should have told us something," he said.

Passengers were given a test to take at home in three days, Berry said.

New Covid-19 cases in the United States are now averaging more than 100,000 a day, shortly after millions of Americans traveled for the Thanksgiving holiday. The seven-day moving average of new cases was 121,437 as of Saturday, according to data from Johns Hopkins University. Prior to this week, the US last topped the 100,000-cases-a-day mark in early October.

The Norwegian Breakaway departed New Orleans on November 28 carrying 3,200 people and stopped in Belize and Mexico. The ship was scheduled to return to New Orleans on Sunday, according to the cruise line's official website.

The cruise line is adhering to relevant quarantine and isolation protocols, the release said. Everyone disembarking the vessel will be tested for Covid-19. Anyone who tests positive for the virus will be required to either travel home in a personal vehicle or continue self-isolating in accommodations provided by the cruise line.

"We take this matter extremely seriously and will continue to work closely with the CDC, the office of Governor John Bel Edwards, the Louisiana Department of Health as well as the city and port of New Orleans," Norwegian Cruise Line said.

There have been no changes to future trips scheduled for the ship, the cruise line said.