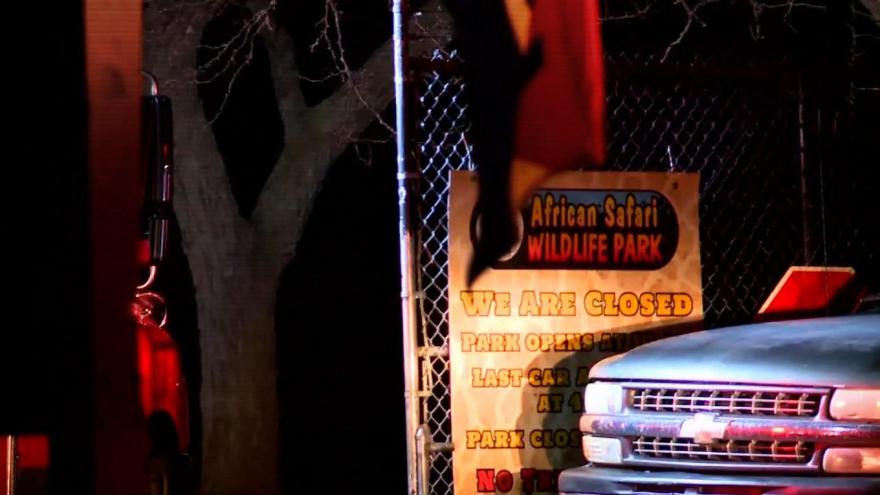 **Embargo: Cleveland-Akron, Ohio** Firefighters were called to a blaze at a barn housing animals at the African Safari Wildlife Park on November 28, 2019.

Firefighters were called to the Port Clinton park at 6:15 p.m. after reports of a fire at a barn housing animals, the Ottawa County Sheriff's Office and park officials said.

Three giraffes, three red river hogs, three bongos and a springbok had been inside the barn before the fire, Officer Carolyn DeMore with the Danbury Township Police told reporters. A bongo is a large forest antelope and the springbok is a medium-sized, gazelle-like antelope.

Holly Hunt, the co-owner of park, told CNN there are 300 other animals in the park and all have been accounted for.

"We are grateful that our staff is safe and no one was injured, but the loss of the wildlife that we care for every day is tragic for our team members who love these animals," park officials said in a statement posted on Facebook.

Hunt said a caretaker initially spotted the fire Thursday following a power flicker in the property. She said the facility had briefly lost power on Wednesday.

Some of the park's animals are usually housed in the heated barn during this time of the year.

The cause of the fire has not yet been determined. The Ohio State Fire Marshal will arrive at the park Friday to investigate the blaze, Kahler said.

A video recorded by a bystander shows two giraffes running away from the flames as smoke pours from the barn. DeMore said first responders found at least one giraffe at a nearby pond.

Visitors to the 100-acre drive-thru park can feed several animals on their drive, including giraffes, zebras and bison, according to the park's website.

The park was closed for Thanksgiving. It will remain closed Friday as authorities investigate the incident and the staff mourns the loss.

The African Safari Wildlife Park was established in 1969. It's located about 37 miles southeast of Toledo, Ohio.