1 suspect in mass stabbing in Canada found dead, the other is still missing 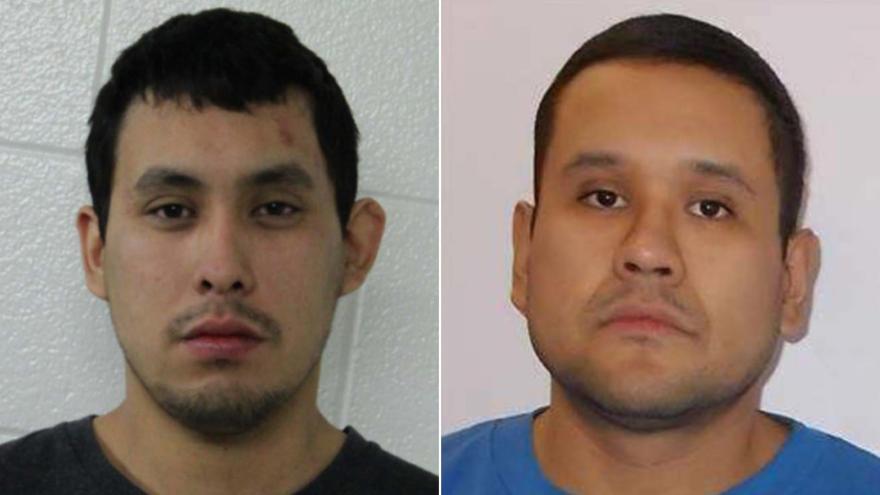 (CNN) -- Damien Sanderson, one of the suspects in a mass stabbing in Saskatchewan, Canada, that left 10 dead and 18 injured, was found dead Monday morning on the James Smith Cree Nation in a heavily grassed area near a house, according to Royal Canadian Mounted Police Assistant Commissioner Rhonda Blackmore.

Sanderson had injuries that were not believed to be self-inflicted, Blackmore said.

Myles Sanderson, Damien's brother, may be injured and seek medical attention, Blackmore added. "Even if he is injured, it does not mean he is not still dangerous."

Blackmore said Myles has a lengthy criminal record that involves both persons and property crimes and she told the public not to approach him if he is seen.

Earlier authorities said the suspects were believed to have been traveling in a black Nissan Rogue with Saskatchewan license plate 119 MPI, while noting it was unclear whether they may have changed vehicles. The vehicle was seen in Regina with two people in it.

Myles Sanderson has been charged with first degree murder, attempted murder and breaking and entering into a residence, the RCMP said Monday.

"Sadly over these past years tragedies like these have become all too commonplace," Canadian Prime Minister Justin Trudeau said Monday. "We'll do what we always do in times of difficulty and anguish, we'll be there for each other, be there for our neighbors, lean on each other, help grieve and help heal."

Trudeau said he called leaders of the James Smith Cree Nation to offer federal resources. The Prime Minister said flags at federal buildings and at the Peace Tower in Ottawa will be flown at half-staff.

James Smith Cree Nation leaders declared a state of emergency Sunday in response to "numerous murders and assaults" on members of the community, according to a news release. At least one attack also occurred in the neighboring community of Weldon, police said.

"It is certainly a very significant event if not the largest we've seen in the last number of years," RCMP Assistant Commissioner Rhonda Blackmore said.

Some victims apparently were targeted while others may have been attacked randomly, police said.

Authorities urge residents in the area to be vigilant and take precautions, including sheltering in place in some communities.

As the manhunt continues, here's what we know:

How did the attacks unfold?

Police received the first report of a stabbing on the James Smith Cree Nation at 5:40 a.m. local time (6:40 a.m. ET), and within minutes several more calls came in reporting other stabbings throughout the community, police said.

Within hours, the situation developed into a mass stabbing event with at least 25 victims, 10 of whom died, police said.

Three helicopters from STARS Air Ambulance were dispatched to James Smith Cree Nation during the attack, company spokesperson Mark Oddan told CNN. The first crew to arrive jumped into triage the victims and the second aircraft brought a physician to help with triage and lead the emergency response, he said.

The helicopter crews took some victims to the Royal University Hospital in Saskatoon and several other patients were brought to local hospitals by ground ambulances, Oddan said. He was not able to provide details on the patients or their conditions.

Multiple dangerous persons alerts were issued by police over the course of the morning, expanding across the Saskatchewan province and into neighboring Manitoba and Alberta.

"To everyone in Saskatchewan, especially those in proximity to the James Smith Cree First Nation area, please shelter in place and stay safe," he tweeted.

Authorities have identified 13 separate scenes where the attacks took place. There may be additional victims who were injured and transported themselves to the hospital, police said, urging possible victims to contact law enforcement.

"Our thoughts are with the many victims deceased and injured, their family, friends and community. It is horrific what has occurred in our province today," Blackmore said.

Who are the suspects?

Less than three hours after the first attack was reported, police identified Damian Sanderson and Myles Sanderson as suspects in the stabbings.

Myles Sanderson, 30, is 6 feet 1 inch tall and 240 pounds with brown hair and brown eyes, according to police.

The vehicle he was believed to be in was reportedly spotted around 11:45 a.m. in Regina, police said. Regina is more than 300 kilometers (186 miles) south of the James Smith Cree Nation.

Regina Police Chief Evan Bray said Monday afternoon: "We are still operating under the impression that Myles is in this community."

The vehicle has not been found, he said.

What has been the response by officials?

The attacks have shaken Canadian residents and officials.

Saskatchewan Premier Scott Moe offered his condolences to the people of the province in a tweet.

"There are no words to adequately describe the pain and loss caused by this senseless violence. All of Saskatchewan grieves with the victims and their families," Moe wrote.

The RCMP in Saskatchewan, Alberta and Manitoba are jointly investigating the stabbings.

"We are dedicating a maximum number of resources to this investigation," Blackmore said.

Two emergency centers were set up to "provide health support" to the impacted communities, the leaders of the James Smith Cree Nation said in a statement.

In response to Sunday's stabbings, the Canadian Football League's Saskatchewan Roughriders announced increased security personnel at their game against the Winnipeg Blue Bombers Sunday. The Roughriders play at the Mosaic Stadium in Regina.

"The Club operates a centralized command (center) on game day that allows immediate connection to local emergency services and the ability to receive up to the minute information when any sort of emergency occurs," the team said in a statement on Twitter.