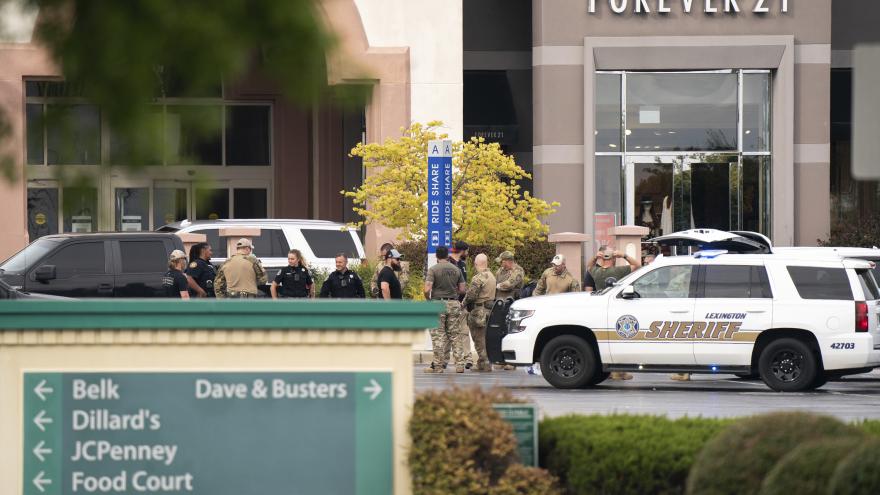 (CNN) -- Police are asking witnesses for any information about a mass shooting at a South Carolina mall that left at least nine people with gunshot wounds and five others injured.

One man has been arrested in connection with the shooting at the Columbiana Centre mall on Saturday that left 14 people hurt, police said.

Jewayne Price, 22, will be charged with unlawful carrying of a pistol, the Columbia Police Department said in a news release. Police said investigators are consulting with prosecutors, and more charges are possible.

A bond hearing for Price is scheduled for 2 p.m. Sunday, the police department said in a tweet. It is unclear whether Price has an attorney.

He was one three people detained following the shooting. Police said two other men who were detained were released after investigators determined they weren't involved.

The shooting unfolded around 2 p.m. during what police believe was a clash between armed people inside the mall.

Police initially said 12 people were injured but later updated that number to 14 -- at least nine of whom were shot. Police said the five others were injured while attempting to flee; their injuries included broken bones and a head injury.

The victims' ages range from 15 to 73, police said. As of late Saturday, a 73-year-old woman remained hospitalized.

Three of the 14 injured victims were being treated at Lexington Medical Center for gunshots wounds and are expected to be released, hospital spokesperson Jennifer Wilson said.

The other 11 people injured were treated at Prisma Health. Nine of them have already been treated and released, Prisma Health spokesperson Tammie Epps told CNN on Saturday night.

Police seized one firearm related to the shooting, and evidence from the crime scene shows at least two different firearms were used by two suspects, police said.

At least three suspects displayed guns inside the mall, but it's not clear whether they all fired shots, the release said.

"It is believed that the shooting was an isolated incident between the suspects and likely stemmed from an on-going conflict," police said in the news release.

The police chief said investigators believe those involved in the shooting knew each other.

"This was not a situation where we had some random person show up at a mall to discharge a firearm and injure people," Holbrook said at a Saturday news conference.

Police are asking witnesses to call 803-545-3525 to share any information about or video of the shooting.

"We know a lot of people saw different things. Please take a moment, collect your thoughts and reach out to law enforcement," Holbrook said.

After the shooting, mall officials issued a statement that was tweeted by Columbia Police.

"Today's isolated, senseless act of violence is extremely upsetting, and our thoughts are with everyone impacted," the statement read. "We are grateful for the quick response and continued support of our security team and our partners in law enforcement."