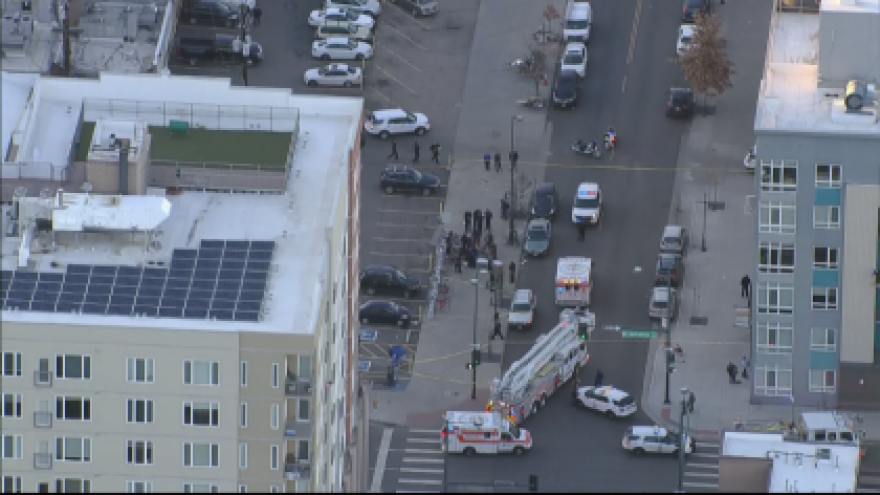 DENVER (AP) — One person was killed and three others were wounded in a shooting on a downtown Denver street Monday, but it was unclear what caused the violence and no one had been arrested, authorities said.

The shooting occurred in a neighborhood of new apartment buildings, restaurants and bars near the Colorado Rockies' stadium just as the evening rush hour was getting underway.

Police spokesman Doug Schepman said investigators did not know whether more than one shooter was involved and had no descriptions of any suspects.

A witness told The Denver Post he saw a man holding a handgun in both hands fire into a group of indigent people, and someone in the group fired back.

"Oh my God, oh my God," Hisam Derani said. "I saw him approach the crowd."

Derani said he was returning home from work when he heard about six gunshots. He said he saw one or two shots fired before he ducked.

He said a gunman got into a car, slammed the door and drove away.

Derani says police interviewed him and later asked him if a man they had detained as a potential suspect was the shooter, but Derani said he was not.

Schepman said investigators did not yet know what led to the shooting.

"It's too early in the investigation right now to be able to say exactly what happened here and why," he said. Investigators were interviewing witnesses and looking for video.

The wounded victims were taken to Denver Health medical center. Schepman said they were in critical condition, but a police department tweet said later the injuries were not believed to be life-threatening.

Hospital spokesman Simon Crittle could not confirm that.

Crittle initially said four wounded survivors were transported to the hospital but later corrected that to three.

Police said witnesses had told officers they saw a fourth victim, a woman who was wounded in the leg, but investigators had not been able to confirm that.