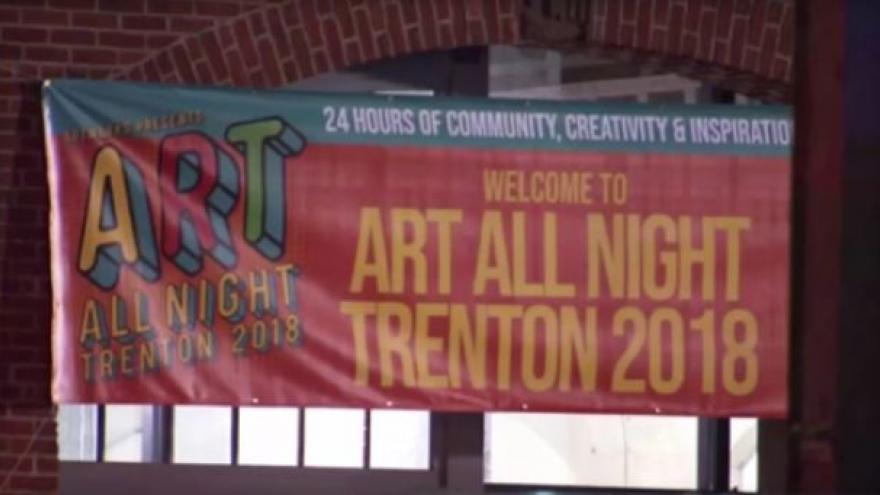 TRENTON, N.J. (AP) — The Latest on the shooting at a New Jersey arts festival (all times local):

Authorities say it appears that "neighborhood beef" is behind a fatal shooting that erupted at an all-night New Jersey arts festival.

Onofri said 17 of those were gunshot wounds. Four people remain in critical condition, including a 13-year-old boy.

Two suspects opened fire around 2:45 a.m. Sunday during the crowded Art All Night festival in Trenton that showcases local art, music and food. Onofri said one suspect is believed to have been shot and killed by police. A second suspect is in custody.

Witness Gennie Darisme said she heard gunshots as she was about to leave. She said she saw one person bleeding on the ground in handcuffs.

The organizers behind the all-night New Jersey arts festival disrupted when gunfire broke out said they are deeply saddened but their dedication to building a better Trenton will never fade.

Authorities say one suspect is dead and 20 people are injured. A second suspect is in custody.

Organizers said on Facebook Sunday the remainder of the festival has been cancelled and they are "still processing much of this."

They said they are "shocked" and "deeply saddened" but their "resolve to building a better Trenton through community, creativity and inspiration will never fade."

Art All Night volunteer Theresa Brown said she has never seen or heard violence like this.

A local prosecutor says that one suspect is dead and 20 other people are injured, including four critically, after a shooting at an all-night arts festival in Trenton, New Jersey.

Mercer County Prosecutor Angelo Onofri told a news conference early Sunday that 16 of the 20 injured were treated for gunshot wounds.

He says that two suspects opened fire during a crowded festival that showcases local art. One of the suspects, a 33-year-old man, was killed.

Authorities say that about 1,000 people were in the area when the shooting started and people stampeded. The nature of the injuries to the four people who did not suffer gunshot wounds was not immediately known.

Shooting broke out at an all-night cultural festival in Trenton, New Jersey, early Sunday, sending people fleeing and leaving at least one person dead and more than a dozen injured, police said.

The shooting began at the Art All Night festival that showcases local art, music and food a little before 3 a.m. Sunday. The event began Saturday afternoon and was scheduled to continue until Sunday afternoon. It typically draws thousands of people.

Trenton police Lt. Darren Zappley told The Trentonian that multiple people were shot and were taken to the hospital. The person who was killed was not immediately identified.

Angelo Nicolo told Philadelphia 6ABC TV that he and his brother were at the event when they heard loud popping sounds. He said people started running down the street.

"I saw two police officers escort a guy that got shot in the leg. They bandaged him up and whisked him away," Nicolo said.