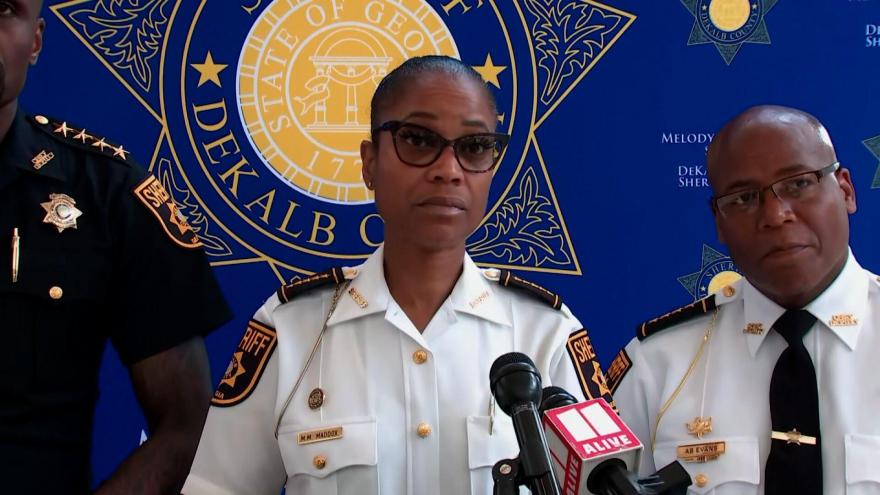 Sheriff Melody Maddox speaks at a press conference following a shooting at a supermarket in Dekalb County, Ga. on June 14.

(CNN) -- Georgia authorities have identified a grocery store cashier killed during a face mask dispute and the man accused of shooting her.

DeKalb County police said Laquitta Willis, 41, was the victim in Monday's shooting at Big Bear grocery store in Decatur, just outside of Atlanta.

Willis was killed after an argument over a face mask, the Georgia Bureau of Investigation said.

The GBI said Victor Lee Tucker Jr., 30, of Palmetto, Georgia, entered the store shortly after 1 p.m. and "got into an argument with a cashier about his face mask" during checkout.

Tucker left the store without making a purchase but immediately returned, the GBI said. He walked directly up to the cashier, later identified as Willis, pulled out a handgun and shot her, authorities said.

Tucker then exchanged gunfire with a DeKalb County sheriff's deputy who was working security at the store, the GBI said.

DeKalb County Sheriff Melody Maddox said the reserve deputy was a 30-year veteran of the force prior to retiring and joining the reserve unit.

Tucker was arrested by two responding DeKalb County police officers "as he was attempting to crawl out the front door of the supermarket," according to the GBI.

The deputy and Tucker were wounded and taken to hospitals, the GBI said.

A second cashier was grazed by a bullet and treated at the scene, the GBI said.

"Our hearts and prayers go out to the Willis family, the injured sheriff's deputy and everyone impacted by yesterday's senseless incident," DeKalb County police spokesperson Michaela N. Vincent said in a statement Tuesday.

It was not clear Tuesday whether Tucker has an attorney.