1,500 GoFundMe pages have been set up by furloughed government employees looking for help 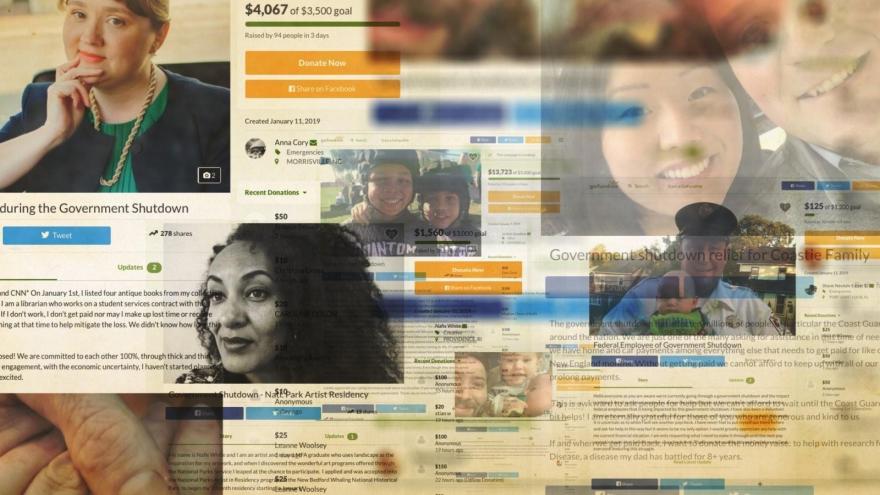 In recent days more than 1,500 campaigns have been set up on the crowdfunding site by furloughed government employees looking for help, GoFundMe spokeswoman Katherine Cichy told CNN. Together, the campaigns so far have raised more than $300,000.

(CNN) -- The pleas on GoFundMe come from people across all walks of life. A single mom. A librarian. A Border Patrol agent. Even an artist.

But their stories all have something in common: They reveal the human toll of the partial government shutdown that's now the longest in US history.

In recent days more than 1,500 campaigns have been set up on the crowdfunding site by furloughed government employees looking for help, GoFundMe spokeswoman Katherine Cichy told CNN. Together, the campaigns so far have raised more than $300,000.

Many of the campaigns started popping up in early January, after it became clear that federal workers affected by the shutdown might start missing paychecks.

People are asking for help to pay their rent or mortgage, to buy food or even purchase diapers for their infant children.

Anna Cory, a furloughed research librarian for the Environmental Protection Agency, said the shutdown has caused financial difficulties that make her feel like her life is in limbo.

"It is difficult. I was just recently engaged on January 2. My fiance and I were planning to buy a house," she told CNN. "Just recently we started house shopping. But we've put that on hold because the bank does not take a friendly eye to seeing a zero on one's pay stub."

The North Carolina woman hopes to use the money from her GoFundMe campaign to buy gas and groceries.

She also started a "government shutdown online yard sale" on her Facebook page to raise funds.

"So right now we're just surviving. We're not thriving," Cory said. "We're not joining the middle class and achieving our dream of home ownership or moving forward with wedding planning because it's an uncertain situation."

So how does GoFundMe guard against fraud? Emergencies like this bring out the generosity in people, which in turn attracts scammers off all kinds.

Cichy said GoFundMe has put together a special team to monitor and vet campaigns set up by federal workers.

"We have a dedicated Trust and Safety team reviewing all campaigns related to the government shutdown," she said. "We deploy proprietary technical tools and have multiple processes in place to verify the identity of campaign organizers and the beneficiary of the campaign. Before money is transferred, an individual's information, including their banking information, must be verified by our payment processor."

Cichy said the platform is also backed by a GoFundMe Guarantee, which promises that funds go to the right place or donors will get a refund.

'I am my family's only source of income'

The reasons why federal workers are setting up GoFundMe campaigns are as varied as the people behind them.

"I adopted them to give them a better life that their biological parents couldn't provide. Now I feel like I'm failing them because the stable home that I have provided for them is now at risk," she said on her campaign page.

Nafis White is an artist who was supposed to be taking part in a National Parks Service artist-in-residency program at a historic site this month in New Bedford, Massachusetts, but it was put on hold after the shutdown began. She's asking for $3,000, which is a little more than the monthly stipend the residency would have covered.

"Excited to begin in January, I was horrified along with the hundreds of thousands of people impacted upon learning that the shutdown was to commence," she said on her campaign page. "All National Park Artist residencies have been halted, and this unexpected situation is proving to be financially challenging for me, as it is for all government employees and adjacent workers."

White said she's getting by right now with the help of family and friends. For now she's staying in a "humble" apartment and has converted one room into a art studio to continue her work. She says it's very important that she reach the financial goal for her campaign.

"So far, thankfully I have the support of enough great people that I will be able to keep my housing for February, buy groceries and pay some bills," she told CNN. "Reaching my goal means that I will be able to survive through March at a very basic level of subsistence. Not making that goal means I could potentially lose my housing, get behind in bill payments and become food insecure."

Kevin Garfinkle of Pembroke Pines, Florida, works for the TSA. He's seeking money to get the basics for his young family, like diapers.

"I am my family's only source of income and due to the partial government shutdown I will not be receiving a paycheck until the government reopens, which means bills will go unpaid but more so than that I will be unable to buy groceries or diapers for my family," he said on his page, which includes a photo of two young children. "This is not something I ask lightly."

The federal employees on GoFundMe have something else in common: The main thing they all want is for the government shutdown to end.

"We just want to get back to work," Cory said.